A Comet Shines Bright In These Stunning Pics From Space 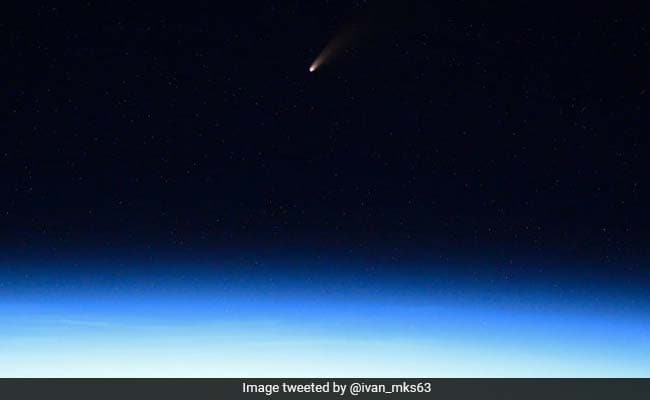 Astronauts and cosmonauts on the International Space Station were lucky enough to witness a natural light show recently - and treated people on Earth to photos of it. They caught a glimpse of Comet Neowise or C/2020 F3 as it came into view of Earth. "Last night's fireworks, for real. Because Science," NASA astronaut Bob Behnken said in a tweet posted from the International Space Station on Sunday, which shows the comet shining bright near the glowing curve of Earth.

Comet Neowise is visible near the centre of the photographs. Take a look:

The pictures have collected over 31,000 'likes' and a ton of comments since being posted on the microblogging platform.

"That is awesome!" wrote one person in the comments section, while another said: "Outstanding - what a seat to the fireworks show."

Russian cosmonaut Ivan Vagner also treated Twitter to a view of Neowise and commented on its brightness. The tail of the comet is clearly visible in stark contrast to the darkness around it in the pic shared by Mr Vagner.

During the next revolution I tried to capture the C/2020 F3 (NEOWISE) comet a bit closer, the brightest one over the last 7 years.

Its tail is quite clearly visible from the @Space_Station!#ISS#comet#NEOWISEpic.twitter.com/FnWkCummD6

It's not just residents of the International Space Station who have been lucky enough to get a view of the comet - people on Earth have managed to catch a glimpse of it too. On Monday,  astrophotographer Kerry-Ann Lecky Hepburn shared a stunning picture of the comet over Canada.

Comet NEOWISE and the city of Toronto, Ontario, Canada ????! I was up really early for this shot. It's not often that we get the opportunity to see or photograph a comet of this brightness and with a tail. I hope you like it!???? https://t.co/BFyxFFw2DEpic.twitter.com/sGZBiEVryM

According to Space.com, Neowise first came on the scene at the end of March. It has since brightened immensely, even as two other comets in the sky faded away.

Comets are snowballs of frozen gases, rock and dust that orbit the Sun. A comet's tail is formed when radiation from the Sun releases gases, and these tails of gas and dust can stretch for millions of miles.