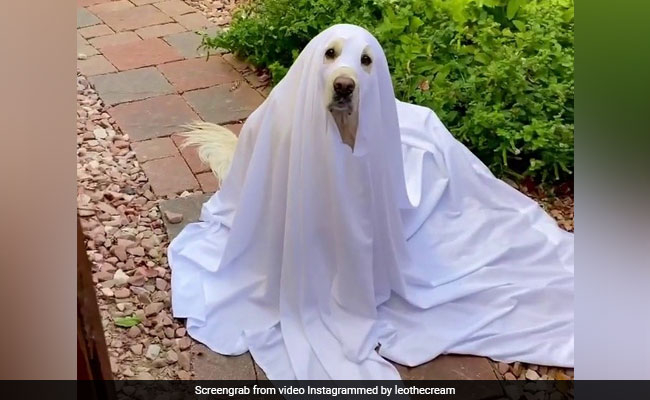 Leo the "ghoulden retriever" is more cute than scary.

With Halloween around the corner, people are getting into the spirit of things by putting up creepy decorations and carving pumpkins. And as the spooky season approaches, so do the ghostly creatures that only make an appearance in October. One such creature - a rare "ghoulden retriever" - is currently winning hearts on social media for being more adorable and scary.

Shared from the Instagram profile of a golden retriever named Leo, a video of the 'ghoulden retriever' is going viral on the photo and video sharing platform.

The clip begins by showing a sign hanging from a door. "Beware of the dog," reads the warning printed on the sign.

Suspenseful music plays as the door is opened to reveal Leo the golden retriever dressed in a ghostly costume - a white bedsheet with holes cut out for his nose and eyes. But even the bedsheet can't hide the amount of cuteness spilling over in this hilarious video as Leo sits calmly, not interested in scaring anyone.

"Beware of ghoulden retriever," reads the caption shared alongside the Instagram Reels video. Watch it below:

Since being posted last week, the video has been viewed over 1.4 lakh times, collecting a ton of amused comments.

"The Golden ghostriever! Only seen in October!" wrote one Instagram user.

"Never seen such cute ghost before," said another, while a third remarked, "Omg I jumped out of the chair."