Gir Forest Video: The lion and the lioness can be seen roaring aggressively at each other in a video going viral on social media. 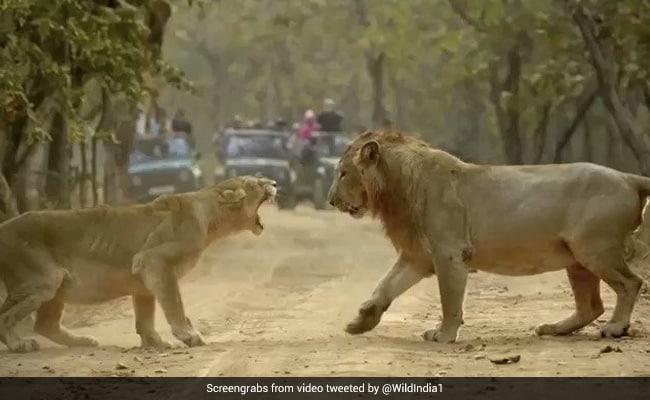 Gir Forest Video: A lion and a lioness fight in this viral video.

You may have seen many lion videos, but have you ever seen a lion fighting a lioness? A jaw-dropping fight between a lion and a lioness was captured on camera in the Gir Forest of Gujarat. Filmed by politician and wildlife photographer Zubin Ashara, the video shows three vehicles full of tourists watching the big cats fight it out in the middle of a mud road.

The undated clip was shared on Twitter by a page dedicated to wildlife photos and videos, called Wild India. In the 22-second clip, the lion and the lioness can be seen roaring aggressively at each other - with the lioness even managing to swipe her paw across the lion's face at one point. According to Wild India, it was recorded at the Gir National Park in Gujarat, which is the last abode of the Asiatic lion in the world.

Watch the fight below:

Since being posted just a day ago, the video has gone viral with over 2.6 lakh views and a ton of amazed comments. It has also prompted a number of jokes on 'marital problems' between the two big cats.

He is like, don't embarrass me in front of all these people.

Last month, Prime Minister Narendra Modi announced on social media that the population of Asiatic lions in the Gir forest had increased, and so had their distribution area.