A Leopard Chases A Herd Of Cattle In Uttarakhand. Watch

The CCTV footage was captured outside the police station of Devprayag. 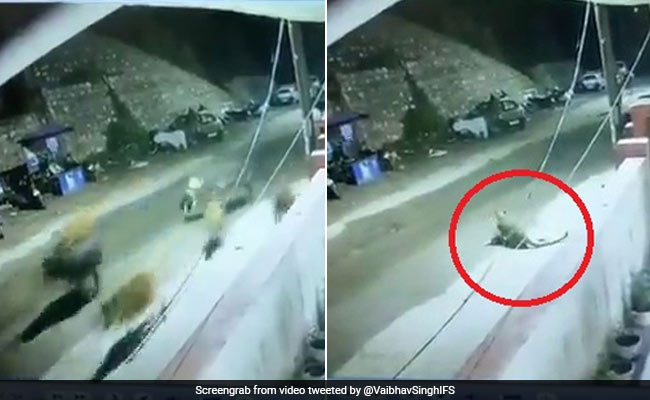 A leopard was filmed chasing cows in Uttarakhand.

A video that is being widely circulated online shows a leopard giving chase to a herd of cattle in Uttarakhand. The hair-raising footage was filmed in the town of Devprayag and shared on social media by Indian Forest Service officer Vaibhav Singh.

Recorded by CCTV cameras outside a police station in Devprayag, the clip begins by showing a herd of cattle running on the road. The reason becomes clear when the leopard comes into view - though it soon gives up on the chase and sits down on the road before getting up. After that, a man was filmed walking out of the police station, catching sight of the big cat and quickly going back inside.

"Leopard policing the streets of Devprayag," wrote IFS officer Vaibhav Singh while sharing the footage on Twitter this afternoon. "Video captured by CCTV of Police Station Devprayag," he added.

IFS officer Susanta Nanda was among those who re-posted the video on the microblogging platform. "A new cop policing the streets of Devprayag...." he wrote while sharing it.

A new cop policing the streets of Devprayag....

The CCTV footage has collected thousands of views on the microblogging platform.

The state of Uttarakhand is home to a large number of leopards. Only this month, a leopard was also filmed entering a house in Uttarakhand's Nainital and attacking a dog.

#WATCH Uttarakhand: A leopard entered a house, attacked and killed a dog & took it away last night in Tallital. pic.twitter.com/xX2tf4KYMt

According to the Ranthambore National Park, the Indian Leopard is a vulnerable species listed on the IUCN Red List because of its declining population. Leopards have been targeted by poachers for their hides and other body parts. However, habitat loss, especially due to farming, also poses a threat to them. Habitat loss has also been blamed for increased instances of human-animal conflict.