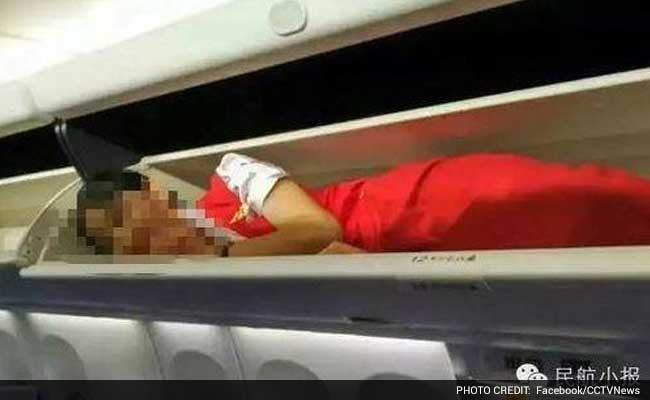 The photos and accompanying article went viral in China over the weekend, inciting considerable fervor from commenters who called the practice "an insult to females" and "really perverted."

Beijing: To make it as a female flight attendant in China, you must have the body of a model and the strength of a martial artist. Each of the coveted positions attracts thousands of applicants - an interest that has little abated despite routinely documented abuse.

At China Southern Airlines, worthy candidates must be no older than 24 and above average height.

At Hong Kong Airlines, they have to master kung fu.

And at Kunming Airlines, it now appears, they should be as compact as pieces of carry-on luggage.

A "Civil Aviation Tabloid" on Wechat, a popular social networking app in China, has released photos of female flight attendants lying uncomfortably in overhead bins. The initiation ritual, which has been in place for nearly five years, marks the employees' first 30 to 50 hours of flight service.

Only women are subject to the treatment at the hands of their male colleagues, who force the female attendants into the compartments, sometimes even closing the lid on them, the article reports.

Those who tried to avoid participating in the bizarre practice were deemed uncooperative and arrogant. Some pictures show the young women's faces buried in a corner of the bin; one features a male staffer flashing a peace sign as he poses beside an attendant covering her face with her hands.

The photos and accompanying article went viral in China over the weekend, inciting considerable fervor from commenters who called the practice "an insult to females" and "really perverted."

Others said the "joke" shouldn't be taken too seriously, pointing out that it looked like some women had climbed into the bins "for fun."

Kunming Airlines apologized for the incident on Monday, noting in a statement that the company does not condone the tradition, which was the "personal behavior" of their attendants and security staff, conducted after flight hours.

The carrier vows to discipline the workers involved and put an end to their conduct.

But Kunming Airlines has long known about the ritual, the Wechat post claims, as female flight attendants had previously voiced their grievances to management without recourse.

The hazing's distinctly physical nature echoes the strict standards that women in cabin crews are expected to meet. China's civil aviation authority mandates that female flight attendants between 5 feet 2 inches and 5 feet 7 inches tall must weigh between 110 and 150 pounds. In August, an attendant from Qingdao Airlines was reportedly grounded because she exceeded this height-to-weight ratio.

It's no wonder, then, that the flight attendants appear to have been placed in the bins with ease. The suggestion seems to be that if a woman didn't fit the compartment, she wouldn't be fit to fly.