A Gunman Held Up A Butcher Shop. Enter Man In Cowboy Hat

Despite accusations that the video was fake, the shop's co-owner said the altercation was very real - and frightening. 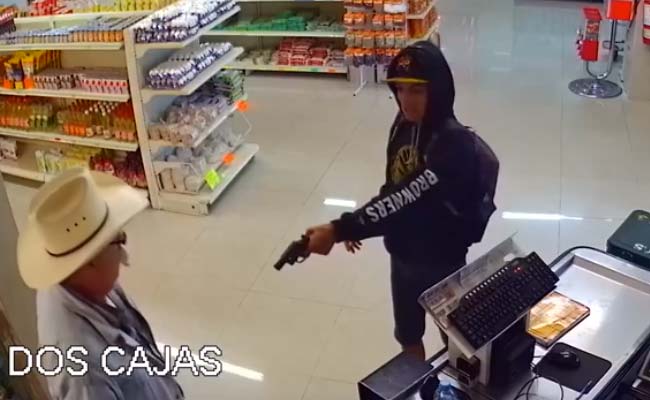 Like a cubist painting or a Tarantino movie, one must observe this minute-long, soundless footage of a robbery attempt in Mexico from multiple perspectives to fully appreciate it.

The antagonist is, of course, the would-be robber, who steps into a butcher shop-slash-convenience store more gangling than gangster. Within seconds, he has produced a handgun from under his navy hoodie and aimed it at three different people. Nervousness? A lack of focus? It's unclear. For what it's worth, he will only be in possession of said hoodie for about 20 seconds longer.

The woman behind the checkout counter is the first to have the gun pointed at her. She gives a few waves of the notebook she is holding - but otherwise barely moves in the face of the threat. Only after about 40 seconds do we see her reach for a phone.

The next target is an older gentleman standing in front of the cash register, sporting a gray mustache and the second-most distinctive hat to make it into a viral video this week. He seems to remain even calmer as the gunman demands something - presumably cash - from him. The "cowboy" shakes his head and at one point even removes his glasses, perhaps to get a better look at the confounding text ("BROWNERS") running down the side of the gunman's hoodie sleeve.

As all this is unfolding, the world's most oblivious customer has legitimately been perusing refrigerated beverages at the back of the store. Just as the cowboy is taking off his glasses, the female customer makes her selection. She turns and begins striding toward the checkout counter and soon catches the attention of the gunman, who makes her Target No. 3.

This is precisely the distraction the cowboy needs. As the gunman is facing the woman, the older man lunges forward and overwhelms the robber from behind until his handgun falls to the floor. The cowboy continues to hold down the gunman as he struggles, flailing, until the two of them stagger into an aisle.

Enter a butcher, who slides into the frame, Kramer style, retrieves the gun from the floor, and scurries back away.

Meanwhile, in the midst of a fracas that was hidden from view, the gunman has somehow slipped free of his hoodie. Now shirtless, he tries to make a break for the door. The cowboy and two butchers apprehend the robber just before he exits the store and pin him down atop a pile of metal shopping baskets.

The butcher shop, Carnes Cares of Monterrey, Mexico, posted video of the botched robbery on its Facebook page Monday and it has since been viewed tens of thousands of times. Despite accusations that the video was fake, the shop's co-owner, Daniel Cardenas, said the altercation was very real - and frightening.

The would-be robber had already come to the store once, a few days before, as if to stake it out, Cardenas told The Washington Post on Wednesday. The man in the cowboy hat is Cardenas's father, Reynaldo Cardenas, who also owns the carniceria, he added.

And despite his cool demeanor on camera, the elder Cardenas admitted later he had been scared.

"Actually he told me that he acted that way out of fear," Daniel Cardenas said in Spanish through Facebook messages. "He really believed that the man was going to shoot them. When he had the chance, he acted instinctively to disarm him."

Police arrived about 10 minutes after the scuffle and took the gunman into custody, he added.

Daniel Cardenas was away from the store when the attempted robbery took place and his family called to tell him what had happened. Upon reviewing the surveillance footage, he said he was relieved for his father.