A Desi In New York Was Heavily In Debt, Battling Cancer. Then...

Together, Saroj and Goyal ran a clothing store for 40 years 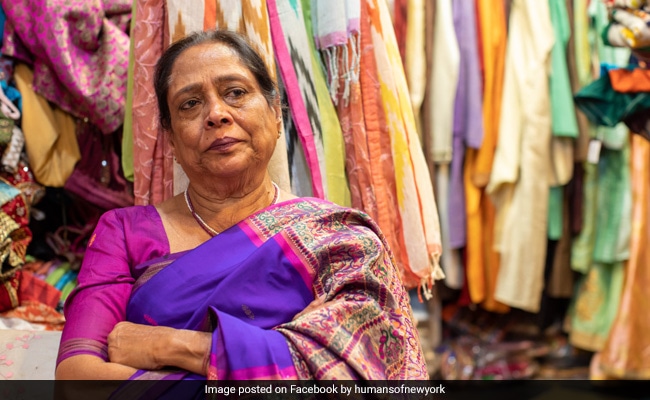 Saroj is battling breast cancer and her store is 24 months behind on rent.

A fundraiser to help out an Indian woman in New York, who was left heavily in debt and battling breast cancer alone after her husband's death, has surpassed its goal of $1,30,000 in just three days. The woman had opened up about dealing with the loss of her husband and struggling with mounting bills and ill health in an interview with 'Humans of New York'. Saroj and Goyal were married for over 40 years, but after Goyal's death two years ago, the clothing store they ran together in New York was left heavily in debt.

Since Goyal's death, Saroj says she has hardly dressed up. "I put on a sari for this interview, and some lipstick. But it's the first time in a long time," she told Brandon Stanton, the man behind Humans of New York, who spoke to her recently. "Because there's nobody asking me to dress up anymore," she says.

Saroj remembers how much her husband liked to see her dressed up for special occasions. "He always wanted me to dress like a queen. Whenever we went to a party, he'd say: 'Put on your nicest sari. Or a little more jewelry' And I'd tell him, 'Oh Goyal, please shut up'," she recalls.

Together, Saroj and Goyal ran a clothing store for 40 years - "and the entire time I was his helper," she says.

"I've always been his helper. I was the shy one. Goyal was the one who approached the customers," Saroj says, remembering her late husband as a man who was always ready with a joke.

"One hundred jokes per minute," is how Saroj describes it. "People would pull him on stage at parties, and say: 'Please Goyal, make the jokes.' He even made the nurses laugh at the hospital."

In the months that he was sick in hospital, Goyal still wanted his wife to dress up for him. "He fought for the longest time," says Saroj, who wanted to donate one of her kidneys to him, but wasn't a match.

The death of her husband was hard on Saroj - not just emotionally but also financially. With little knowledge of finances or the intricacies of running a business, she was left heavily in debt.

"He'd do anything to make me laugh, but he never told me anything," says Saroj. "Nothing about the accounting. Or how much we owed. Or the taxes."

"I'm a little upset with him. Because he left me in this situation," she says.

When the pandemic came, Saroj had to close down their store, which sells handmade Indian clothing and fabrics. "And when we opened our doors again, there was nobody: no cars, no nothing. I owe so much money now," she says. Today, she is behind 24 months of rent.

While she misses her husband - and has an altar dedicated to him at home - Saroj can't help being angry at him too. "I'm angry, I really am. I wish he'd have told me more. Because without him I can't deal with this," she says.

Her two children live far away, and Saroj is battling breast cancer alone right now. In a note at the end of the Facebook post documenting her story, which was published three days ago, Mr Stanton wrote, "Because of her current situation, her mental health is nearly as bad as her physical health. The stress is too much for her."

Since the story was published online, help has been pouring in for Saroj. Mr Stanton's fundraiser for Saroj has  raised over $4,92,000 in donations, surpassing its goal of $1,30,000. "The $130,000 from this fundraiser will not only eliminate Saroj's debt, but it will also subsidize the rent of low-income New Yorkers," wrote Mr Stanton. Additional funds will go directly to Saroj, who is currently undergoing treatment for her breast cancer.

Mr Stanton shared an update on Saroj's story two days ago. In the post, he revealed that people have been dropping into her store for selfies with Saroj since her story gained attention on social media. He also revealed how Saroj attributed the success of the fundraiser to Goddess Durga.

A post shared by Humans of New York (@humansofny)

"After our first meeting Saroj... revealed that most of her own prayers were directed to Durga Maa, the 'Goddess of Energy'," wrote Mr Stanton. "Over the next few weeks she became a thing between me and Saroj. We pasted Durga Maa animations into our text threads. Saroj sent my daughter a Durga Maa birthday card. And whenever we hit a snag in our negotiations with her landlord, it was: 'Nothing to worry about. Durga Maa is on the move.'"

When the fundraiser hit $25,000 after only a few minutes of being posted, documentary film director Nicolas Heller filmed Saroj's reaction. "I didn't realize Nico was filming. But it made me smile when he sent me the video. Especially when I noticed Durga Maa dangling from a chain around Saroj's neck," wrote Mr Stanton.