A Bus Fell Down A Sinkhole, And Then The Memes Began...

Take a look at some of the funniest Pittsburgh bus memes 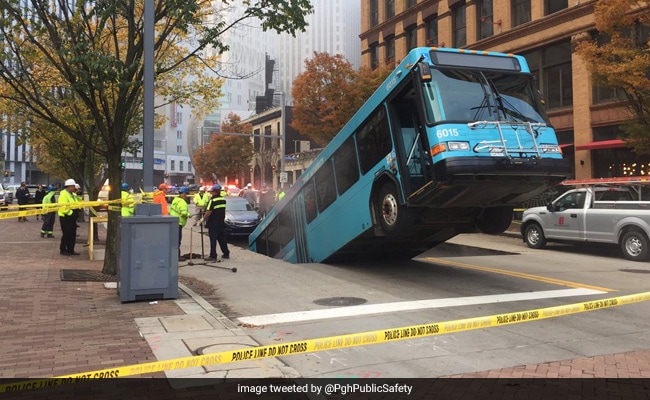 A bus plunged into a sinkhole in Pittsburgh on Monday.

On Monday, a massive sinkhole opened up on a busy road in Pennsylvania, USA, and partially swallowed a bus. The public transit bus plunged into the sinkhole in downtown Pittsburgh during rush hour traffic on Monday morning. According to NBC News, the only passenger on the bus was a 56-year-old woman who was treated for minor injuries at a local hospital and soon released. The driver was unharmed in the road collapse.

Photos shared by the City of Pittsburgh on social media show the back half of the bus in the sinkhole while the rest of it sticks out.

Once the Internet realised that no major harm had been done to anyone in the incident, the bus in the sinkhole soon became fodder for hilarious memes.

Take a look at some of the funniest Pittsburgh bus memes that have taken over the Internet and are making netizens laugh out loud:

FOR ALL MY PITTSBURGH LOCALS PLEASE APPRECIATE THESE MEMES BEING SENT TO ME ABOUT THE BUS IM LOSING IT pic.twitter.com/ZSgxqBGCJS

Now the Pittsburgh sinkhole bus monster is trying to eat a guy. pic.twitter.com/monqAe8qjr

The Pittsburgh bus reminded many of Titanic

Dramatic photo shows woman attempting to save her lover from falling into a sinkhole that swallowed part of a bus in downtown Pittsburgh Monday morning. Witnesses say it didn't look like she was trying all that hard, really. More at noon. pic.twitter.com/Zoz8So9pDo

A bus almost got sucked into a sinkhole downtown and everyone is now making memes of it and it is peek Pittsburgh. pic.twitter.com/vMKh3R295V

It even inspired a haiku

Foggy good morning
Let's get on the bus today
Oh no the bus sank pic.twitter.com/yPikEKPOoJ

And a Christmas ornament!

Two cranes were used to pull the bus out from the sinkhole later in the day. The city's official Twitter account posted a video of the removal.

UPDATE: A crane company has been summoned to set up two cranes to remove the bus from the sink hole. Traffic will be affected for 8 to 10 hours as parts of Penn Ave and Tenth Street we closed. https://t.co/wkYzpYtwKg

Thanks to the public for your patience. Please stay clear of the area for the foreseeable future. pic.twitter.com/W13QOQNh4r

The sinkhole has not yet been repaired. According to CBS News, part of the road that collapsed will be closed to public for about eight weeks.

Last year, two cars plunged into a sinkhole that suddenly opened on a road in China after hours of heavy rain.