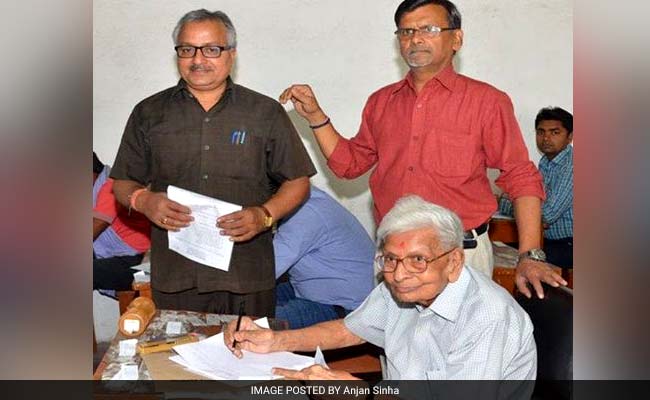 Born on April 1, 1920, in Uttar Pradesh's Bareilly town, Raj Kumar Vaishya retired in 1980 as a general manager in a private firm.

Patna: A 97-year-old man, who had graduated in 1938, has appeared in an exam for a post-graduate degree of Nalanda Open University (NOU).

Clad in a light coloured shirt and dark trousers, Raj Kumar Vaishya wrote in English and used 23 sheets in his MA Economics part one exam, an NOU official told IANS on Saturday.

He sat for three hours in the examination centre like the others, most of them younger than his grand-children, the official said.

"Despite heat wave that forced people indoors, Vaishya surprised all of us including young examinees, when he appeared at examination centre," said the official.

Mr Vaishya enrolled last year for an MA in economics for two reasons: to fulfil his long nurtured desire to get a Masters degree and to study economics to be able to understand why India has failed to solve problems like poverty.

"I have appeared in exam and now I am a step closer to fulfilling my dream," he said.

Born on April 1, 1920, in Uttar Pradesh's Bareilly town, Mr Vaishya retired in 1980 as a general manager in a private firm in Koderma (now in Jharkhand).

He did his graduation from Agra University in 1938 and got a degree in law in 1940. He said he failed to study for a Master's degree then due to increasing family responsibilities.

Mr Vaishya has been living with the family of his second son Santosh Kumar in the posh Rajendra Nagar colony in Patna for the last 10 years after his wife's death.

Santosh Kumar, when in his early 70s, retired from the National Institute of Technology-Patna. Santosh Kumar's wife Bharti, in her early 60s, retired as a professor from Patna University.

A vegetarian and a lover of simple traditional Indian food, Mr Vaishya said he never consumed fried food and always ate less than what he could have.