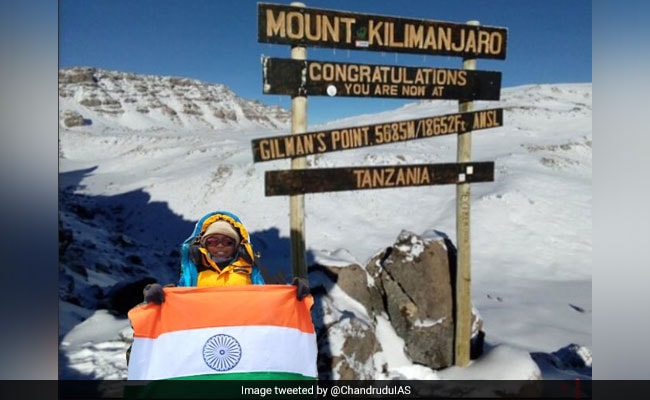 A nine-year-old from Andhra Pradesh has managed to conquer Africa's highest peak. Kadapala Rithvika Sri from Anantapur climbed Mount Kilimanjaro on February 25, reports The Hindu. The Class 2 student climbed to Gilman's Point at 5,681 metres above mean sea level with her father and guide. By completing this feat, Rithvika has become one of the youngest persons to scale the mountain, which is located in Tanzania.

Mt Kilimanjaro is a dormant volcano and the highest single free-standing mountain in the world at 19,340 feet. Gilman's Point is one of the three summit points of Mt Kilimanjaro. Climbers who manage to reach this point receive the official Kilimanjaro climbing certificate.

According to the New Indian Express, Rithvika's father, Kadapala Sankar, is a cricket coach and sports coordinator in the Special Olympics Bharat wing of Rural Development Trust, Anantapur. He had scaled the peak last year and took his daughter along this time.

IAS officer Gandham Chandrudu applauded the young girl's achievement in a tweet shared on Sunday. "You have grabbed the opportunities despite many odds. Keep inspiring," he wrote while congratulating the nine-year-old.

Congratulations to Ritwika Sree of Ananthapur for becoming the world's second youngest& Asia's youngest girl to scale Mt Kilimanjaro. You have grabbed the opportunities despite many odds.Keep inspiring@ysjagan#APGovtSupports#AndhraPradeshCM#PowerofGirlChildpic.twitter.com/Xu8LZw8OVz

Mr Chandrudu had helped the father and daughter duo by releasing Rs 2.89 lakh from the SC Corporation funds for the expedition.

Rithvika participated in Level 1 training at the Rock Climbing School in Telangana and Level 2 training in Ladakh before embarking on the quest to conquer Kilimanjaro.

"Rithvika Sri took part in the mountaineering expedition with enthusiasm and she could make it in her first attempt," her father said.