Another Day, Another 'Gator. This Time, 9-Foot Reptile Cools Off In Pool

A yellow rubber duck - wearing sunglasses, no less - bobbed along in the pool and witnessed how the 9-foot scaly reptile was removed 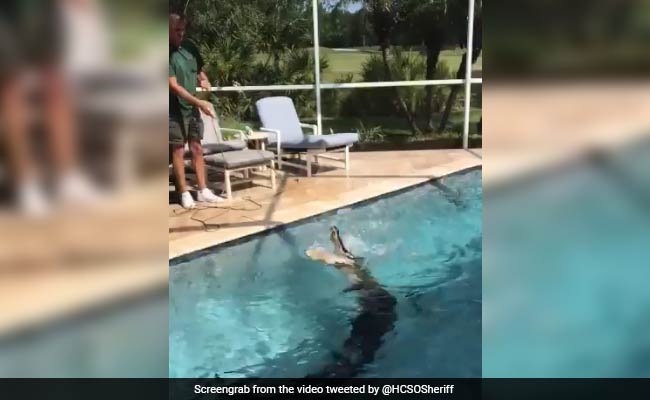 9-foot alligator found in Florida family's pool. Watch how it was removed

By now we've kind of lost count of the number of alligators spotted in Florida. From golf courses to motels, parking lots and even swimming pools, terrifying (for us, anyway) videos and photos of the sharp-toothed reptiles being spotted across the US state routinely pop up on social media.

On Thursday, a Florida sheriff's office shared a footage of police officers helping a professional trapper remove a nine-foot-long alligator from a family's swimming pool.

We're guessing the 'gator took a dip in the pool to beat the blazing heat. Though understandable, we're not so sure the family whose pool was invaded was too happy to see the unwelcome scaly guest.

The Hillsborough County Sheriff's Office posted a short clip of the alligator removal on Twitter. The video shows the trapper lassoing the large reptile with some rope as it thrashes around in the pool.

In a rather hilarious sight, a yellow rubber duck - wearing sunglasses, no less - bobs along in the pool.

"No fear from 'Mr. Duck' when District 3 Deputies assisted a licensed trapper with a 9-foot gator removal from a residence within The Eagles community on Muirfield Drive," the sheriff's office tweeted.

WOW - No fear from "Mr. Duck" when District 3 Deputies assisted a licensed trapper with a 9' gator removal from a residence within the Eagle's community on Muirfield Drive pic.twitter.com/tiVPn7WYH3

Earlier this week, a baby alligator was filmed strolling through the corridors of a Florida motel. Earlier this month, an 11-foot alligator was found enjoying a late night swim in a Florida family's pool. The 'gator even broke through a screen to make its way to the pool.

Florida is estimated to have 1.25 million alligators, making sightings of the reptile increasingly common. As temperatures rise, the gators tend to get more active.Click for more trending news