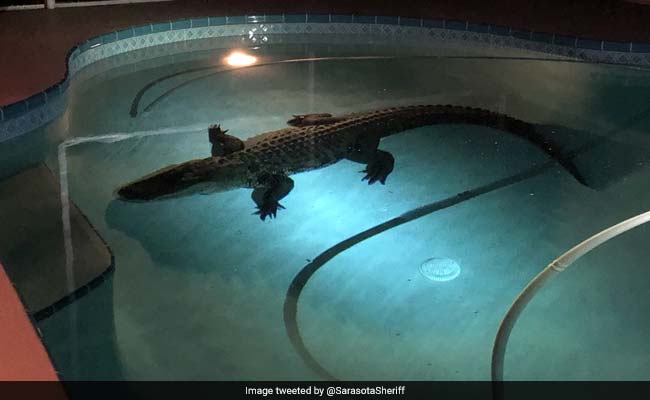 Florida's gator problem is well known. The coastal US state is infamous for the reptiles interrupting daily life -  having been spotted at golf courses, shopping malls and parking lots among other places. One such critter was found cooling off in a couple's backyard swimming pool.

On Friday, Sarasota County Sheriff's Office responded to a late night 911 call from a family in Nokomis, Florida about the animal enjoying a swim in their pool. The gator broke through a screen to make its way to the pool, the sheriff's office said on Twitter.

It was homeowner Patricia Carver's husband who spotted the creature after hearing commotion outside their house.

Cops posted images of the giant creature, measuring 11 feet, floating in the pool on Twitter.

Just when you think your #TweetFromTheBeat is off to a slow start... you get a call for a #Gator in a swimming pool #Florida#OnlyInSarasota#SOS#SendHelppic.twitter.com/0wCofgyTyG

Video posted by the police department shows the giant reptile splashing around before being pulled out of the pool by a professional trapper. According to Time, no person was injured in the rescue operation. It's not clear what happened to the alligator after it was captured.

So, remember that #gator call we went on earlier? Here's some video as the trapper pulled him from the swimming pool. Did we mention he measured 11 feet long?! #TweetFromTheBeat#NeverADullMoment#OnlyInFloridapic.twitter.com/s3DtK3xzPR

According to Defenders of Wildlife, Florida is estimated to have 1.25 million American alligators, making sightings of the reptile increasingly common. With temperatures warming, the gators tend to get more active.

In a recent incident, a 6-foot alligator, nicknamed 'Gabby', was caught swimming at the bottom of a homeowner's underground pool.Click for more trending news