8 Dogs Come Together To Set A World Record For Conga. Watch Viral Video 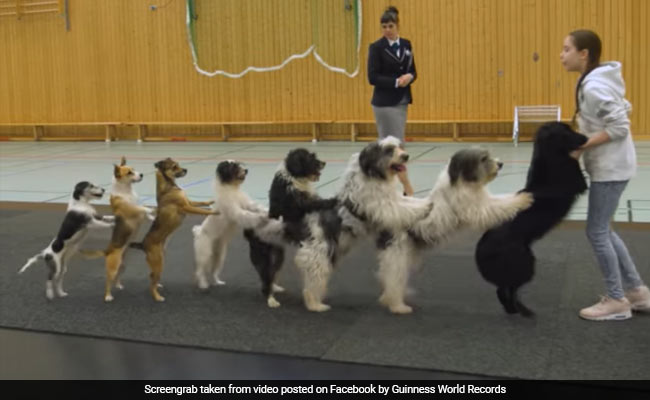 A 12-year-old dog trainer from Germany has earned a Guinness World Record for teaching her dogs how to do the conga. Alexa Lauenburger has trained eight of her dogs to form a conga line - a feat that has won her the Guinness title for "Most dogs in a conga line".

The conga is a Latin American dance in which one person stands behind the other to form a chain.

To achieve the record, Alexa and her dogs - Emma, Jennifer, Katy, Maya, Nala, Sabrina, Sally and Specki - formed a conga line in front of a Guinness adjudicator. "The first dog in the line (Sally), leaning on Alexa, had to cover a minimum distance of 5 m (16 ft 5 in) in conga formation, while the others had to maintain paw-to-back contact with the dog in front for the duration," said Guinness World Records.

The dogs aced the challenge - and how!

On Wednesday, Guinness World Records took to social media to share a video of Alexa and her dogs forming the record-setting conga line. The video has delighted thousands of viewers across the world, collecting more than 1.4 million views on Facebook alone. Watch the video below:

The video has been 'shared' over 700 times on Facebook, collecting a ton of amazed reactions.

Though she is all of 12 years old, Alexa Lauenburger has already won Das Supertalent - a German talent-hunt reality show. She has also appeared on America's Got Talent, where her performance delighted judges.