54-year-old SOS in a bottle warned about vanishing glaciers 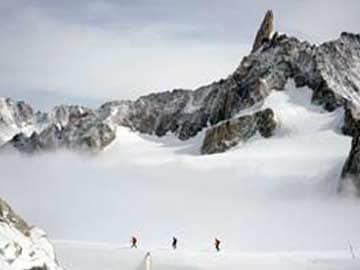 Toronto: At a time when glaciers are melting at an alarming pace, an SOS buried in a bottle 54 years back in the Canadian Arctic, and unearthed now, sent a distress signal about the world's rapidly disappearing glaciers.

An American geologist Paul Walker, concerned about the melting of ice, buried a message in a bottle during his exploration of Ward Hunt Island in Nunavut, Canada, in 1959.

He measured the distance - about 1.2 metres - from a glacier to where he buried the message in a bottle, requesting that anyone who found the note contact him with an update on the glacier's distance to the bottle site, Chronicle Herald reported.

Unfortunately, owing to medical reasons, he died the same year he left the note.

For 54 years, the message remain hidden until this summer, Warwick Vincent, a geologist at Laval University, discovered Walker's note in a glass vessel, the report added.

To his astonishment, in little more than 50 years, the original distance of 1.2 metre between the glacier and the bottle was now measured at 101.5 metres - approximately a soccer field's length of ice melted away.

"We captured the complete loss of this ice shelf. Suddenly, we caught this open water, we think for the first time in thousands of years. The changes are extraordinary, particularly the last 10 years, and especially the last two years," Vincent was quoted as saying.

What did he do to the Walker's note? Well, Vincent placed the original note where it belonged - back in the bottle. But the truth is out.

According to NASA, Earth is losing half a trillion tonnes of ice per year. "A study finds that the world's small glaciers and ice caps in places like Alaska, South America and the Himalayas contribute about 0.02 inches per year to sea level rise," Tom Wagner, cryosphere programme scientist at NASA, was recently quoted as saying.

Bill Gates Once Jumped Over A Chair. Elon Musk "Pretty Impressed" By Video