This father-daughter duet has delighted many. 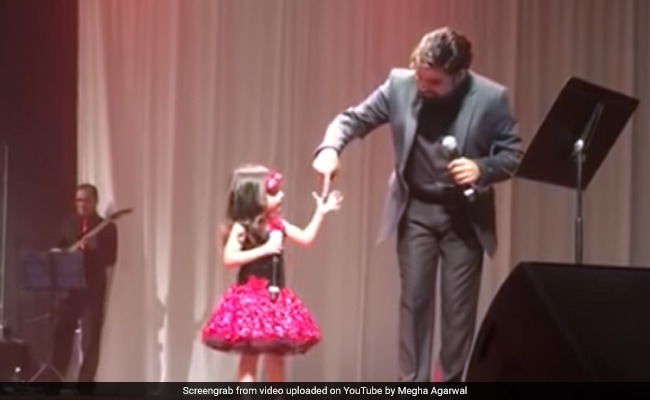 A video of a three-year-old joining her father onstage and stealing the limelight has gone viral online. Veda Agrawal toddled up to the stage as her father, Madhav Beena Agrawal, was singing 'Chhoti Si Aasha' from the film Roja. The three-year-old then demanded that she be allowed to sing the song alone, and wowed the audience with her rendition.

A video of the incident shows her father telling the audience that Veda wanted to sing alone and requesting the musicians to start over. The audience cheered the young girl on as she executed an adorable rendition of the song. After a while, her father joined her in singing 'Chhoti Si Aasha' too, turning the solo performance into a delightful duet.

The video was also shared on Twitter by Veda's mother, Megha Agarwal, where it has collected more than 15,000 'likes' and 1.7 lakh views.

"My 3+ year daughter and her father performing together for the first time. Please bless her," wrote Megha Agarwal while sharing the video on the microblogging platform.

My 3+ year daughter and her father performing together for the first time. Please bless her 🙏#DilHainChotaSa@arrahman@anandmahindra@hvgoenka@SrBachchan@narendramodi@akshaykumar@mangeshkarlata@shreyaghoshal@Singer_kaushiki@ShekharRavjianipic.twitter.com/ZfvtingtTD

The three-year-old's rendition of 'Chhoti Si Aasha' won many over. Businessman Harsh Goenka was among those who praised her:

It is such a wonderful feeling to watch the duo perform!! God bless you all!! Stay happy, forever!!

What do you think of the performance? Let us know using the comments section.