The rare white catfish was released back into the water after the 15-year-old caught it. 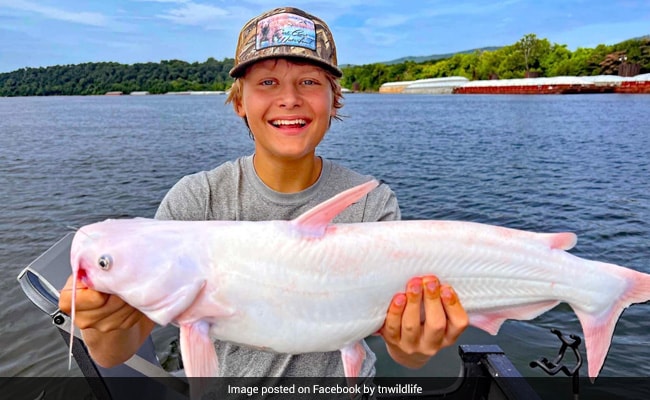 The rare fish was mostly white with some light pink areas on its fins.

A rare white catfish was recently caught by a 15-year-old boy in the United States.

The Tennessee Wildlife Resources Agency (TWRA) informed that Edwards Tarumianz was taking part in a fishing trip captained by Richard Simms from Scenic City Fishing Charters on June 28 when he snagged the unusual fish, which belongs to the species Ictalurus furcatus - commonly known as the blue catfish.

This species is typically bluish-grey in colour, however, the specimen that Edwards caught was mostly white with some light pink areas on its fins.

Take a look at the rare fish below:

Speaking to Newsweek, Richard Simms said that fish was ïncredibly rare”. “Most anglers fish their entire lives and never see one. I am 67 years old, have boated literally tens of thousands of catfish over the years and it was the first I'd ever seen in person,” he added.

Further, Mr Simms said that the catch was so unusual that had they not taken a picture of the fish, people would have found it difficult to believe.

“Regardless, we all agree that it is a great and rare catch,” a TWRA spokesperson said, as per the outlet.

Mr Simms informed that the white catfish was released back into the water after the 15-year-old caught it.

Meanwhile, internet users lauded the boy for his rare catch. One user wrote, “He will be a fisherman for the rest of his life and what a fishing tale he will have! Congrats young man!” Another said, “What a special memory for that young man! He will never forget that day for sure! Happy he caught it as no one would ever believe him with a "The One that got Away" story about a fish that looks like with of those!” “WOW! What a beautiful fish. Congratulations!” wrote third.