Internet users jokingly said that the fish has "a face only a mother could love". 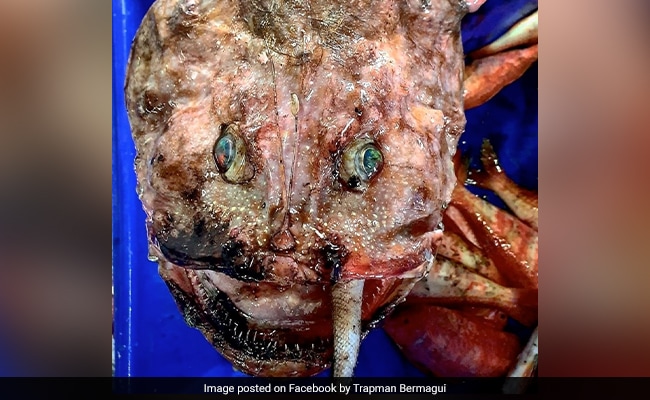 The unidentified fish was 4kg and caught 540 meters deep.

An unknown creature dubbed the "ugliest" has been caught in deep waters off southeastern Australia.

Professional fisherman Jason Moyce, who goes by the moniker Trapman Bermagui on social media, reeled in the mystery monster off the coast of Bermagui hometown. Taking to Facebook, he shared a photo of the fish and asked internet users to help him identify it, as both he and the captain of the charter boat had no idea what the fish could be.

In the caption, Mr Moyce wrote, "I'm pretty sure this is a blobfish ??? caught in deep water, east off Bermagui.  Probably the ugliest fish I've ever seen. Apparently good eating."

The fish appears a mottled pink-grey. Its eyes bulge out the sides of its head, and its huge mouth, which takes up most of its face, contains rows of sharp teeth. The monster beast can be seen to still have the bait fish inside its mouth.

Speaking to Newsweek, Mr Moyce informed that the fish was 4kg and caught 540 meters deep.

Since being shared, the image of the unidentified fish has left internet users baffled. In the comment section, while some agreed with Mr Moyce that the fish could be a blobfish, others put forward other ideas, including monkfish or toadfish. Some users even hilarious joked that the fish is "definitely the stuff of nightmares".

One user wrote, "I think it's an Anglerfish? There are several types, but they're all uuuuugly and pretty creepy." Another said, "It's a monkfish! poor man's lobster apparently!" A third user hilarious wrote, "Please put it back in its spaceship," while fourth said, "A face only a mother could love."

Meanwhile, according to James Maclaine, senior fish curator at London's Natural History Museum, it is "definitely not a blobfish". Speaking to the outlet, Mr Maclaine said, "That looks to me very much like a monkfish-also known as an anglerfish-from the family Lophiidae." He also went on to explain that the fish has the lure it uses to catch its prey, just between the eyes.