A 13-foot-long, 661-pound stingray found in Cambodia's Mekong River earlier this month has now been confirmed as the largest freshwater fish in world. 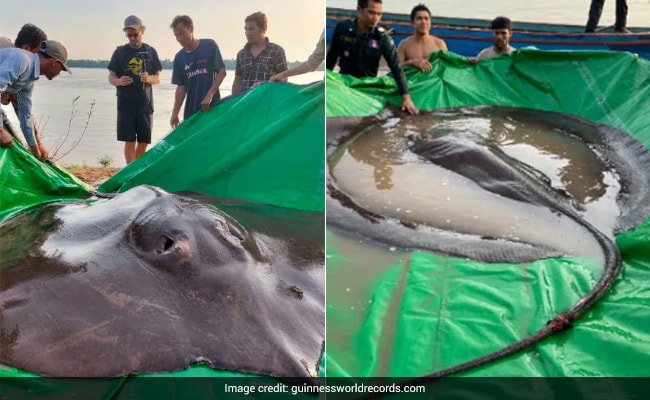 A 13-foot-long, 661-pound stingray found in Cambodia's Mekong River earlier this month has now been confirmed as the largest freshwater fish in the world by Guinness World Records (GWR).

This stingray is longer than a pickup truck and weighs more than a grizzly bear!https://t.co/KQGNxACaCx

The fish was caught by fishermen in the Stung Treng district of northern Cambodia on June 13, as per GWR.

According to a statement from the fisheries and environmental consulting firm FISHBIO, scientists believe the animal is a positive development for the river, which is threatened by human encroachment and development, damming, and climate change.

The extraordinary fish, sometimes known as a whipray, measured 2.2 m (7 ft 2 in), which is equivalent to the length of two ping-pong tables, with a foot of "wings" on each side (30 cm), GWR said further.

According to GWR, the record-breaking ray, belongs to an endangered species. It was given a Khmer language name, "Borami" which means "full moon," in reference to both her rounded disc-like form and the early evening release time.

The measurements were taken by a group of international ichthyologists as part of the US-Cambodian "Wonders of the Mekong" project, in cooperation with the Cambodian Fisheries Administration, despite the fact that the discoveries were made by locals.

Dana Lee, a fisheries biologist from FISHBIO, was one among the researchers that assisted in measuring this river monster, GWR added.

"Catching the first glimpse of the giant stingray as it was pulled from the depths was a magical moment for me," he told GWR.

"The Mekong has always been somewhat of a mythical place in my mind and this creature almost seemed like the river personified," he added.