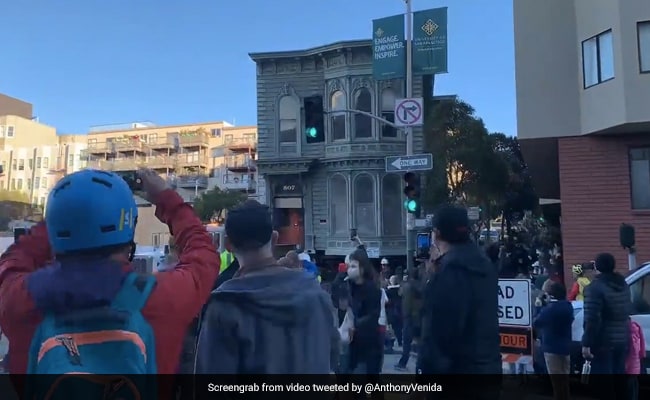 A Victorian House was moved to a new location in San Francisco.

Ever seen a house moving down a street? This Sunday morning in San Francisco, hundreds of onlookers cheered as a historic Victorian house rolled down to its new address in a jaw-dropping scene. According to news website SF Gate, the 139-year-old house was loaded on a hydraulic dolly operated by remote control which then moved it down seven blocks to its new location.

The 1880 Italianate-style house with a green exterior was seen rolling slowly down Franklin Street, where it stood for 139 years, to Fulton, where it now rests next to an old mortuary. The six-bedroom, three-bath home, known as Englander House, rolled to its new address at the speed of 1mph.

Videos that have gone viral on social media show the historic house moving down the roads of San Francisco.

The terrestrial equivalent of the Mars rover landing! pic.twitter.com/OjJ8FhZzoB

"One of those things your eyes see and your brain absolutely refuses to take in. A building. Moving down the road," wrote one person in the comments section. "Incredible! What an engineering feat," another said.

The house's journey has been eight years in the making. According to The Guardian, trees were trimmed, parking meters were ripped up and power lines removed to prepare for the journey.

The plot in Franklin Street where Englander House once sat will now become the site of a new apartment complex. Meanwhile, the historic house and the mortuary will be combined into a new development.