10-Year-Old Writes To Airline CEO For Advice. His Heartwarming Reply...

In his letter, Alex wrote: "I'm Alex Jacquot, a 10-year-old boy (please take me seriously) and I want to start an airline." 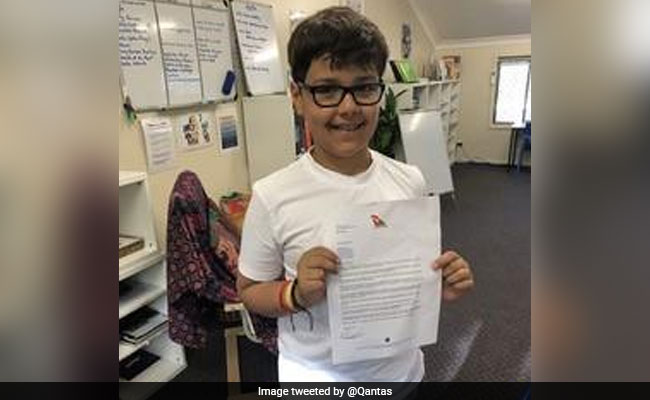 The CEO of Qantas Airways recently took the time to reply to a young boy's letter, and his heartwarming response is winning people over. Alex Jacquot, a 10-year-old from Australia, wrote to Qantas CEO Alan Joyce, asking for advice on starting an airline.

Alex, as self-proclaimed co-founder and CEO of "Oceania Express," was looking for tips on running an airline. Now, his handwritten letter, and Mr Joyce's sweet response to it, have gone viral online after being shared on Twitter by Qantas.

"Our competitors don't normally ask us for advice, but when an airline leader reached out, we couldn't ignore it. Naturally, there was only one way to respond: CEO to CEO," said Qantas while sharing a picture of Alex, along with the letters.

Our competitors don't normally ask us for advice, but when an airline leader reached out, we couldn't ignore it.
Naturally, there was only one way to respond: CEO to CEO. pic.twitter.com/JTFpzn5a6Y

In his letter, Alex wrote: "I'm Alex Jacquot, a 10-year-old boy (please take me seriously) and I want to start an airline."

He went on to talk about the things he had already figured out, like catering, and the staff he had hired for his airline - Oceania Express. While ending the letter, he also asked Alan Joyce if he could offer any advice on how people could sleep during long flights.

The CEO, in response, wrote: "Thank you for letting me know about your new airline. I had heard some rumours of another entrant in the market, so I appreciate you taking the time to write."

He added that while he did not generally give business advice to competition, he was making an exception in this case as he too was once a young boy "curious about flight and all its possibilities."

He also invited Alex to a meeting to "compare notes on what it's like to run an airline."

His heartwarming response has won him much praise online:

As a former Qantas employee, I could not be more proud than I am right now to be affiliated with a company (that I will always feel part of). Well done, Alan.

This is so beautiful and heartwarming. Thank you to @Qantas CEO for taking the time and reply to the young man and treat him with respect. We all are fulfilling our childhood dreams in what we do for a living.

Wow. This is the nicest thing I read today!

According to Daily Mail, Alex's mother Natasha Jacquot said that she was not expecting such a great response. The family is now waiting on a confirmation of the dates for Alex's meeting with Mr Joyce.

Viral Video: Student Turns Up For Morning Lecture With Mattress And Bedding