1-Year-Old Boy Swallowed A Nail Clipper. How It Was Removed

He grabbed and swallowed it while playing with his mother 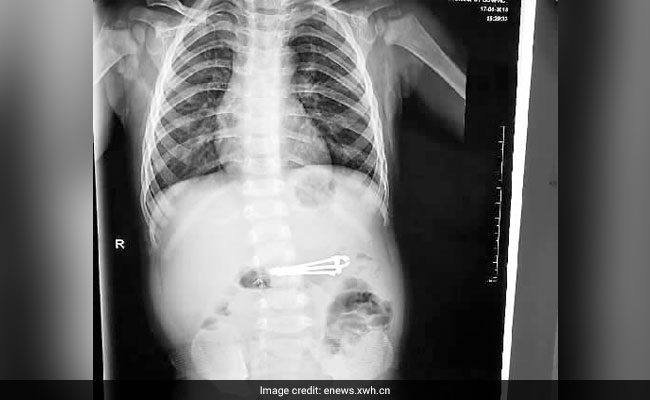 A toddler was rushed to a hospital after he grabbed a nail clipper and swallowed it. The incident took place on April 17 at Changchun in north-east China.

According to New Culture Post, the mother said that her 16-month-old boy grabbed a nail clipper she was using and started running around the house. When she tried to chase her son, nicknamed Feifei, he thought she was playing.

During the chase, Feifei put the nail clipper in his mouth and swallowed it. He was immediately rushed to the hospital.

At the Changchun Children's Hospital, doctors found a 2.4 inches long nail clipper in the boy's stomach and successfully removed the object with an endoscope.

Feifei was put under general anaesthetic for the 25-minute procedure.

A clip by Pear Video shows the whole process.

In the end, the 16-month-old was discharged from the hospital without any lasting harm done.

Just a few days ago, doctors in China pulled out from a man's stomach a lighter that he had swallowed 20 years ago.
Click for more trending news