For the last 3-4 months, citizens say the government has systematically been cutting down trees so that they have the 75 acre biodiversity park ready by 2031.

Environmentalists, children and many more were at the protest hugging trees or tying them rakhis

Noida citizens have taken the festival of Raksha Bandhan quite literally. To protest the felling of trees in Sector 91 in Noida people have started tying rakhis and hugging trees. Popularly called the green belt, Sector 91 is now being brought down to make a recreational biodiversity park.

The 50 crore project is a part of the Noida Authority Department. 3000 eucalyptus trees have been cut down along with some local varieties of neem and babool which is illegal according to forest department rules.

For the last 3-4 months, citizens say the government has systematically been cutting down trees so that they have the 75 acre biodiversity park ready by 2031. Today to protest against this, environmentalists, children, as well as senior citizens staged a protest hugging trees or tying them rakhis. 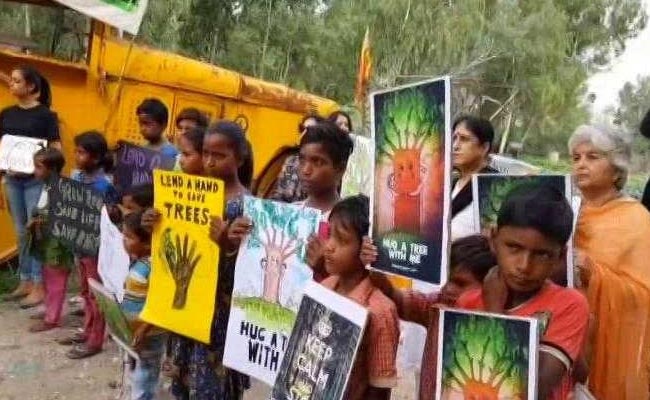 While on one hand cutting of the trees is a clear violation of NGT guidelines that demand 10 saplings be planted for every tree that is cut on the other the forest department claims that the 3000 eucalyptus trees that are being felled should have ideally been done 15 years ago. The citizens of Noida are however heavily dissatisfied with this decision.

"This is the only thing that saves our lungs. I wonder why they are felling so many trees for a bio-diversity park, it could be a bio diversity forest," says Madhu Chowdhury, a resident of Noida.

Chaavi Methi, a volunteer at the Chipko movement of Delhi expressed concern for the disintegrating forest ecosystem. "At least 60-70% of the land here has already been cleared you could see so many stumps I am more concerned about the wildlife that is dependent on these trees. There is nilgai, peacock and even deer."

Felling of trees had been a deeply disturbing issue for the people of Delhi, one of the world's most polluted cities. Thousands have been holding protests for weeks in posh South Delhi to put an end to the felling of 17,000 trees for a Central plan to build houses for government officers and a commercial complex. Few agreed with the Centre's plan to plant a larger number of saplings, pointing out that they cannot be a substitute for full-grown trees.