Noida Metro: Named the Aqua Line, the metro corridor connects Noida Sector 51 with Greater Noida's Depot Stations, which is located at the heart of the city. The Aqua Line has a current total of 21 stations made operational under phase-1 of the project. 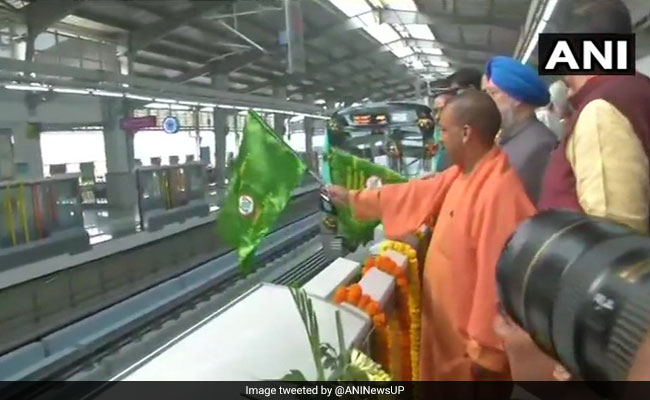 The twin cities of Noida and Greater Noida, which already boast of great connectivity and roads gets another boost to public transport with the Noida-Greater Noida Metro line inaugurated by chief minister Yogi Adityanath today.

Named the Aqua Line, the 29.7-km metro corridor connects Noida Sector 51 with Greater Noida's Depot Stations, which is located at the heart of the city. The Aqua Line has a current total of 21 stations made operational under phase-1 of the project.

Of the 21 stations, fifteen fall in Noida and six in Greater Noida.

Chief Minister Yogi Adityanth inaugurated the Noida Metro Aqua Line from Greater Noida's Depot Station, from where he took a ride on the new metro till Sector 142 station.

The Delhi Metro Rail Corporation (DMRC), which operates the Delhi Metro, will assist the NMRC over the next one year in operating the Aqua Line.

The Noida-Greater Noida metro line has 19 trains with four coaches each. These would be converted to six-coach trains over time, once the number of daily commuters rise.

Noida Metro's Aqua Line will have have an interchange station at Noida Sector 51-52, from where commuters can change over to the Delhi Metro's Blue line, which connects Noida to Dwarka with important interchange stations at Yamuna Bank for Anand Vihar and Vaishali, Connaught Place (Rajiv Chowk) for Gurgaon, New Delhi Railway Station and Delhi University North Campus, Mandi House for Faridabad, Mayur Vihar to connect with ring road and AIIMS, and Botanical Garden to connect with outer ring road, south Delhi and the Delhi Airport.

Commuters however, will face some difficulty initially as the Delhi Metro currently operates only till Noida City Centre in sector 32. The extension of the Delhi Metro's Blue line to sector 52 (interchange) and on towards Ghaziabad-Indirapuram is still under construction. Till then, commuters using the Noida-Greater Noida metro line will have to travel approximately two kilometers between Noida Sector 51 station and Noida City Centre station.

Once the interchange station is ready at Sector 52, commuters changing from the Blue Line to the Auqa Line and vice versa will have to walk approximately 200 metres from one line to another. The NMRC has said that a skywalk or footover bridge will directly link the two stations (lines).

NMRC had in December 2018 announced fares for the Aqua Line, with minimum being Rs 9 and the maximum Rs 50. Commuters can buy QR-coded paper tickets or use smart cards, the officials had said.

The trains are designed to run at a maximum speed of 80 kmph, clocking an average speed of 37.5 kmph. Seat reservation through different colours has been done in the coaches for ladies, senior citizens and differently abled persons. Dedicated space has been provided for wheelchair in driving trailer cars at both the ends of the trains, according to officials.

The Aqua Line, whose construction started in May 2015 and was completed in record time, was initially expected to be opened for public in November 2018.