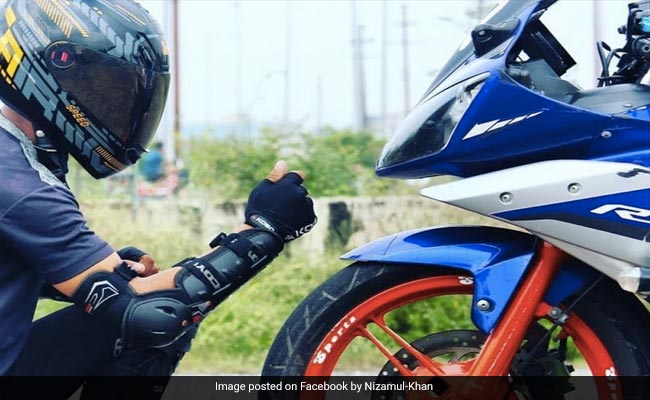 Performing stunts on motorcycles on city roads has landed a 26-year-old YouTuber with 1.5 million subscribers in jail, the Noida Police said on Thursday. Nizamul Khan was previously arrested by the Noida Police in 2020 in connection with the murder of his girlfriend's brother who had objected to their relationship, they said.

He got bail from the Allahabad High Court last year and began making content for social media, especially YouTube videos, the police said.

Khan is a resident of Amroha in Uttar Pradesh, but had been staying in Nithari village in Noida Sector 30.

"On Wednesday, some videos and pictures of a person performing stunts on a motorcycle surfaced. The police took note of it and Nizamul Khan was arrested," Additional Deputy Commissioner of Police (Noida) Ranvijay Singh said.

"During investigation, it also came to light that he was arrested by police in connection with a murder case in 2020 but had got bail last year. He had been posting videos and pictures (on social media) of him performing stunts on two-wheelers," Mr Singh said.

The motorcycle used for the stunts has been impounded, the officer said, adding others involved in the filming of the dangerous stunt videos are on the police's radar.

"From what can be seen, it is clear that some other people were making these videos. We will soon track them and act against them," Mr Singh said.

A fresh case has been filed against Khan at Noida Sector 24 police station. "He was produced before a local magistrate, who remanded him to judicial custody," the officer said.

In a similar action, three young men were arrested on May 28 after their video styled on superhero "Shaktimaan" had gone viral on social media.

Before that, on May 25, the Noida Police arrested an 18-year-old man for allegedly causing nuisance on a city road by performing a stunt in his SUV to promote himself on social media. The car used in the stunt was impounded.