Around a dozen fire engines were rushed to the spot, where the Fire Department personnel were trying to bring the blaze under control. 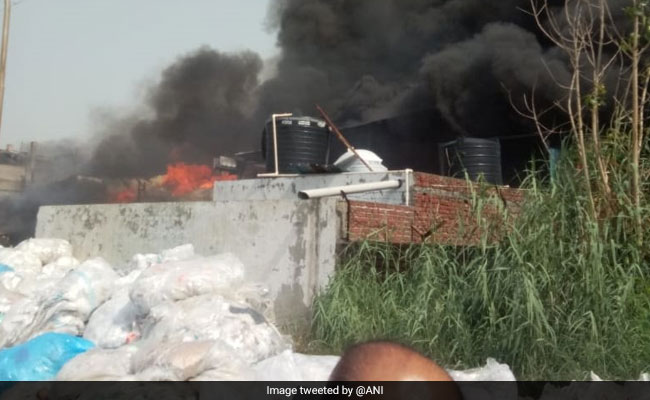 Thick, black smoke billowed from the plastic product-manufacturing companies and could be seen from a distance while flames reached a height of 30-feet.

The blaze was reported at around 3.15 pm and fire fighting operations continued late in the evening, officials said.

As many as 20 fire engines were rushed to the spot, where the Fire Department personnel under the supervision of Noida Chief Fire Safety Officer Arun Kumar Singh were trying to bring the blaze under control, officials said.

"We have been able to prevent further spread of the fire in adjoining buildings but it would take some more time before the flames could be completely taken care of," Mr Singh told PTI.

"The two companies had a lot of plastic material which compounded the fire and let it spread easily. The cause of the fire is yet to be ascertained," he added.

While no loss of life has been reported so far, heavy damage to property is expected, according to officials present on the site.

"So far, there is no report of any loss of life or any person being trapped in the fire," Station House Officer, Phase 2, Farmood Ali Pundir said.