After the video gained traction, BMC conducted clean-up drives to clear the filth accumulated on the beach. 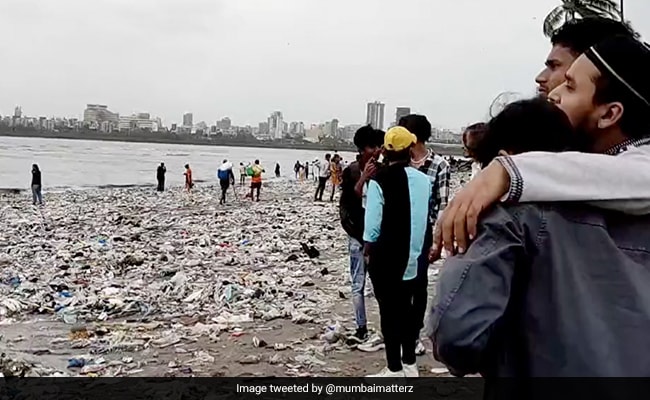 The video has accumulated more than 95,000 views.

Despite several warnings, awareness campaigns, advisory posts and regulations, people in Mumbai can't seem to stop throwing garbage in the sea. And now a shocking video proving the same has surfaced online.

Shared on Twitter by MumbaiMatterz, the clip shows a panoramic view of plastic littered on Mahim beach. People are seen standing amidst the dirt. While some are seen clicking selfies, others are seen enjoying the breeze.

The caption of the post read, “Beaches in Mumbai now open. Citizens throng Mahim beach to have a look at the #ReturnGift from the Arabian Sea…”

Citizens throng Mahim beach to have a look at the #ReturnGift from ArabianSea..#PlasticPollution#MumbaiRainspic.twitter.com/1JUmIpWof2

Since being shared, the video has accumulated more than 95,000 views. For obvious reasons, the clip received numerous angry and concerned reactions too.

“Oh God! It seems all will die but plastic will only survive on this planet earth,”  wrote one user. “Nature warns first, when it has no effect, it will react. Let's not wait for that reaction, because we may not be able to bear that,” said another.

A third user added, “We should do our bit as our citizens to keep the beach clean.” “Never mess with nature the sea, the forest, trees. Nature always gives a fitting reply. Sea never keeps any dirt in it,” commented fourth.

Meanwhile, after the post gained traction, the official account of Ward-GN of Brihanmumbai Municipal Corporation (BMC) shared a follow-up. The authorities conducted clean-up drives to clear the filth accumulated on the beach.

Sir, As u mentioned # Return gift its true . Citizens shall avoid throwing waste in drains & rivers which ends up un sea.BMC regularly cleaning daily throughout day all time.

The BMC shared before and after images of the Mahim beach.