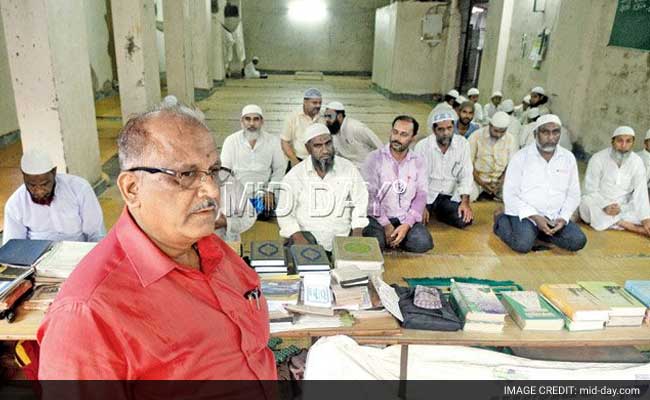 United we pray: Mukund Nagar businessman Dilip Kale paved the space with marble so that namaazis could pray in comfort.

Mumbai: While the lynching incident in Dadri brought simmering communal tension into national focus, closer home in Dharavi, a 53-year-old businessman has set an example of Hindu-Muslim brotherhood. With the local mosque closed for redevelopment, it is thanks to this Hindu leather merchant that the local Muslim community has a place to offer namaaz.

"Our masjid was very small and old, which is why we began its redevelopment in March. But after that, we had nowhere to offer our prayers," said Haji Shaukatali, trustee of Noor Masjid in Mukund Nagar. When the community approached Dilip Kale, he did not hesitate to help them.

Kale, who runs a store called Jazz Leathers in Sion, owns a second shop right opposite the mosque in Mukund Nagar. This 2,500 sq ft shop was just right for the purpose, and Kale readily offered it to them. "They came to me for help and I readily gave them my shop to use. After all, these are my people. We have all been living together in this area for over 40 years," said Kale.

The shop is situated on the ground floor of the Jai Bajrangbali building, which is in the finishing stage of redevelopment. With the building not yet ready for use, it was Kale who put marble flooring in place so his neighbours could offer prayers in comfort, and he even had lights, fans and taps installed there.

"The place was newly constructed, so we had issues offering namaaz on the uneven floor. Within a few days, Kale had marble tiles installed, along with lights and fans. We need to wash our hands and feet before prayers, so Kale even installed taps," said Attiullah Chaudhary, one of the local residents.

Local residents said Kale had not even accepted rent from them. "The place can fetch over R1 lakh per month in rent, but Kale is not even taking a single rupee from us. We have been using the shop for namaaz since April, and will continue to use for a few more months, till the masjid is ready," said a local, Imam Azam. With Kale not charging any rent, the community has managed to raise Rs 8 lakh for the redevelopment of the mosque.

"Till the masjid is ready, they can use the place free of cost, said Kale, adding, "I don't think I am doing something big. What I will do with money? I don't want rent."

Brotherhood
According to Chaudhary, this is an example of true Hindu-Muslim harmony. "These days, there is so much hatred in people and just one spark can lead to riots. In such a time, Kale has done such noble work. It is a slap on the faces of those who want to destroy peace," he said.

"We call this Ganga Jamuna tehzeeb. Just like Ganga and Yamuna rivers meet, Hindu and Muslim cultures also come together in peace here, he added.

Another resident, Khurshid Ahmed said, "We celebrated important festivals here - the whole month of Ramzan and Bakri Eid was celebrated in the space that Kale provided to us." The same sentiments were echoed by Kale, who says the communities help each other in times of need.

"They say Dharavi is a communally sensitive area, but there is no such problem in our locality. Even during Ganpati festival, our pandal uses the support from the masjid's walls. I feel blessed to have the opportunity to do this holy work," he added.