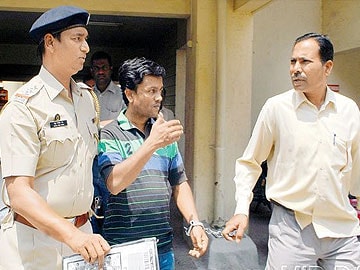 Murder he wrote: Wanawadi police reached Sagar Gaikwad's (centre) home around 10 am and found the bodies of his wife, daughter and mother in two separate bedrooms. Pics/Mohan Patil

The next morning, residents of SLK Heights, Fatima Nagar woke up to the sounds of police sirens and officials questioning people after the accused, identified as Sagar Madhav Gaikwad, confessed to strangling his mother, wife and daughter.

According to Wanawadi police, Gaikwad, who stayed in the apartment on rental basis, first administered sleeping pills to his family and then strangled each of them.

Gaikwad, who was unemployed for the last two years and involved in share trading for the past year, lived with his wife Kavita, mother Shakuntala and daughter Ishita.

Cops said that on Tuesday afternoon, Gaikwad gave the sleeping pills to the three of them. Then, around 3 pm, he strangled his daughter with a scarf.

After a two-hour interval, he did the same to his mother, and finally at 7 pm he murdered his wife. He placed their bodies in two different bedrooms of the apartment, and went and slept in the hall.

The next morning around 9, Gaikwad called his friend and asked to be dropped off to the closest police station, where he confessed to the murders.

The stunned cops rushed to his place and found the dead bodies, which were sent for post-mortem around 2 pm.

In his statement, Gaikwad said that he had taken a R6-lakh loan from a co-operative bank for a car. He was paying the monthly instalments but an amount of R4.5 lakh was still outstanding.

He added that he had taken another R1.9-lakh from a private moneylender at a 15 per cent interest rate.

"Gaikwad said that as he was finding it difficult to repay the amount, the moneylender was threatening him and his family with dire consequences. Unable to find a way out, he killed his family," said an official from Wanawadi police station.

Cops said that Gaikwad purchased the sleeping pills from a medical store at Vaiduwadi and knew the name of the medicine, as his mom regularly took the same pills.

Commenting on what spurred him to commit the triple murder, Gaikwad in his statement said that on Tuesday morning, he received a call from a moneylender, Ravi Pawar, demanding that he cough up R30,000 by evening. Disturbed and worried about where he would get the cash from, he decided to end his life.

"I was severely stressed and thought of ending my life. But it occurred to me that if I ended my lifemy family would suffer. So I decided to kill them and then end my life. After strangling my wife, child and mother, I tried to hang myself from the fan," said Gaikwad in his confession to the cops.

Promoted
Listen to the latest songs, only on JioSaavn.com
Additional Commissioner of Police (North Region) Prakash Mutyal said, "In his statement Gaikwad said that he committed the offence owing to depression.

He also mentioned that he tried to end his life, but prima facie we were unable to find any evidence to substantiate these claims. We will wait for the inquest and post-mortem reports, and investigate the case from all angles."