See another Bijlee on the streets? Click and send 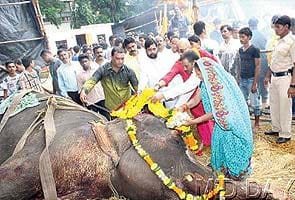 Mumbai: The lights may have dimmed on Bijlee, but it's time to make sure that no other tusker suffers the same fate. And a city NGO called PAWS (Plants and Animal Welfare Society) has taken up the cudgels on behalf of the city's beleaguered pachyderms.

The NGO has started a campaign aptly called 'Save Jumbo,' in which they are appealing to citizens to send pictures of elephants in and around the city that they may spot being used for begging or for streetside entertainment.

The NGO will then register a complaint with the relevant departments, so that their masters can be put behind bars.

Sunish Subramanian Kanju from PAWS said, "The time has come that the authorities take serious note of the elephants being used for begging in and around Mumbai. If the authorities don't take proper measures now, other elephants will also have to suffer like Bijlee."

The NGOs have asked Mumbaikars to take photographs of the elephants at work and forward them to PAWS.

"If people see any elephant in Mumbai or surrounding areas being used for begging or entertainment, they should immediately click pictures and email it to PAWS, after which we will draw up the data and follow up the matter with concerned departments."

PAWS also alleged that there are seven or eight more such elephants in and around Mumbai that are being used for commercial purposes.

"There are three elephants in Dahisar, one in Mulund, one in Ghatkopar-Kurla and three in Navi Mumbai, all of which are being used for begging. All these animals are in poor health and the forest department should take a serious note about the same," alleged Sunish.

Sunish revealed that in a single day a mahout earns more than Rs 2,500 from begging. "The entry of elephants into the city is not allowed, but the police don't take action against those using it for begging."

PAWS has also written a letter to the Animal Welfare Board of India. If at all an elephant is being brought to Maharashtra from another state, its owner should have an ownership certificate, a transit permit, a medical fitness certificate from an authorised veterinarian, a certificate of implantation of Microchip, and Elephant Insurance Policy.

Promoted
Listen to the latest songs, only on JioSaavn.com
Here's how you can help

If you see an elephant, click a photograph of it on your mobile or camera and upload it on www.facebook.com/savejumbo with the time, date and location. You can also email the information to pawsmumbai@gmail.com with the subject line 'Save Jumbo'. PAWS-Mumbai will take up each complaint with law enforcement authorities. You can also call the PAWS-Mumbai Helpline 9833480388