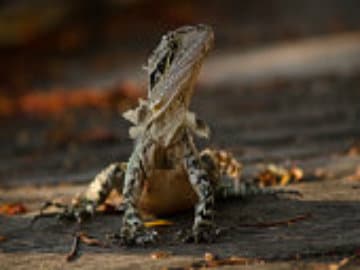 Mumbai: A Mumbai scientist has earned a rare distinction of getting a new species of gecko - discovered last year from the Western Ghats in Maharashtra - named after him.

First found near the famous Kaas plateau - or the Valley of Flowers - by a team of young scientists, an international journal Zootaxa Tuesday published a research paper confirming the new species discovery.

"It belongs to the genus Cnemaspis, or the dwarf geckos and was first found in January 2013 in the lateritic plateaus here. The unique feature of these geckos of the genus Cnemaspis is a rounded pupil in their eyes," Bombay Natural History Society senior scientist Varad B. Giri told IANS here Wednesday.

As a tribute to their "guru", they decided to name it as Cnemaspis Girii for his immense contribution to Indian herpetology.

Incidentally, Giri already has a snake species named after him in 2012 - Dendrelathis Girii - which he discovered from the Western Ghats in 2012.

C. Girii inhibits the dense evergreen forests along the streams and rivulets in Kaas plateau - famous as Valley of Flowers - in Satara district. It's part of the 1,600-km-long Western Ghats stretching from Kerala, across Karnataka, Goa and Maharashtra, to Gujarat.

First noticed in 2010, the C. Girii was different from the two species of this genus (Cnemaspis), which was known from south Maharashtra, said Mirza.

To compare the new species, Mirza and Sanap visited the London Natural History Museum and examined species of related geckos collected from India.

Later, the team carried out further research and field studies to conclude this species was found only along the forest stream and not on the Kaas plateau, making it vital from the viewpoint of conservation.

"The plateaus here support a high degree of endemic fauna which still remains poorly documented," said Sanap on the endeavour.

Promoted
Listen to the latest songs, only on JioSaavn.com
"The new discovery highlights the need for dedicated surveys across the north Western Ghats to document the diversity of reptiles as many narrowly distributed species would fall prey to the ever increasing anthropogenic pressure," suggests Giri.