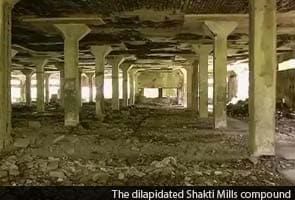 The five accused allegedly raped the 22-year-old girl on August 22 inside the deserted Shakti Mills compound in central Mumbai while she was on assignment with a colleague. (File photo)

Mumbai: The mother and a colleague of a photo-journalist who was gang-raped in the Shakti Mills compound in Mumbai on August 22 deposed before a local court on Tuesday.

Speaking to reporters, Special Public Prosecutor Ujjwal Nikam said "The victim's mother was deposed today and while giving the statement she narrated how the brutal incident happened on her birthday. And the second witness was the Shakti mill victim's boss who was presented in the court today...after this the victim may also be presented in the court."

Defence Lawyer Moin Khan told reporters, "The defence cross-examined the witnesses. The matter will now be heard on the 17th. It depends on the prosecution about which witnesses they want to produce in court."

The photojournalist and a colleague who was with her when the assault took place are yet to depose in court.

The five accused allegedly raped the 22-year-old girl on August 22 inside the deserted Shakti Mills compound in central Mumbai while she was on assignment with a colleague. The men allegedly assaulted the colleague and tied him up in belts before taking turns to rape the girl, holding a broken beer bottle to her head.

Three of the accused - Vijay Jadhav, Qasim Bangali and Salim Ansari - are also accused in another gang-rape at the same spot on July 31 this year.

Promoted
Listen to the latest songs, only on JioSaavn.com
The photojournalist's gang-rape case reignited the massive outrage that had swept across the country after the December 16 gang-rape in Delhi, when a 23-year-old medical student was fatally assaulted in a moving bus by six men, one of them a minor.