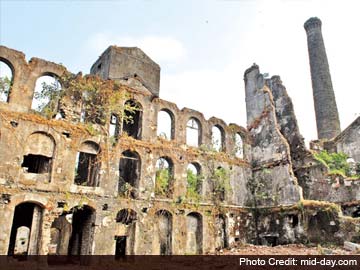 The Shakti Mills Compound where both the gang-rapes took place. (File photo)

Mumbai: "They deserved death. If there was any harsher punishment than this, their crimes would merit that too," said the distraught mother of the telephone operator who was gang-raped inside Shakti Mills Compound in Mumbai on July 31 last year.

Even as three men convicted of the crime received the death sentence yesterday, the verdict is a small triumph for the mother and her daughter, who are still struggling to come to terms with the trauma of the experience, and the humiliation that has become a part of their daily lives ever since.

The survivor's mother, who works as a security guard with a private firm, added, "This crime is a blot on society. If rapists like them are set free, it will only encourage molesters and rapists, and send a wrong message to society. Also, it is necessary that equal urgency is shown in all rape and molestation cases."

The telephone operator was gang-raped on July 31 in the Shakti Mills Compound, where she had gone with her former boyfriend. The survivor's mother was on tenterhooks that night, as her daughter didn't return home. The worried mother's relief was short-lived when her daughter came back, as she brought back a horrifying account of what had been done to her.

Later that month, the news of a photojournalist's gang rape in the same compound hit the headlines. With three accused common to both cases, the police combined the two and submitted it for trial.

"This incident has changed our lives. We live in a locality where word spreads very fast. Some of our neighbours have made our lives hell. They taunt us when we pass. While she has been struggling to overcome the trauma, the local boys have not been letting her do that. She is often chased by youths in the area. When we venture out for family functions, we feel the difference in our relatives' approach towards us," said the woman's mother.

Living in constant fear, the woman locks her daughter inside their house before leaving for work.

"How do I leave her at someone else's mercy, after this? She hardly goes to night school these days. I have lost faith in everyone. To divert her mind, I have enrolled her in a basic computer course. But on most days, I accompany her till she enters the classroom."

The woman added that since the time of the incident, her work has suffered immeasurably.

Thankfully, her colleagues at office, who are aware of the crime her daughter was subjected to, have helped her out by letting her devote more time to her child. The survivor's elder sister has been staying in a boarding school for the past two years.

The traumatised woman admitted that even when she is at work, her thoughts lie with her daughter back home. Every hour, she keeps checking on her daughter, with the help of her neighbours. "She does all the household work, watches TV and reads newspapers at home. When I am away, I keep talking to her over the phone to ensure that she is safe," she added.

There are days when her daughter becomes irritable. She has received psychiatric treatment in an attempt to overcome the trauma of the incident. She follows tips given by her doctors to deal with the depression, such as counting numbers on her fingertips.

Informed that the verdict is considered by lawyers as among the fastest in a gang-rape case, the mother said, "The elections also have a role to play in this conviction. If the elections were far, the sentencing would have taken much longer."

Promoted
Listen to the latest songs, only on JioSaavn.com
The survivor's mother also denied reports that her daughter has married her boyfriend. "We are completely cut off from him. He is responsible for whatever has happened. Now that the culprits have met their fate, I will deal with this guy separately. He has also been harassing my daughter. I have complained against him to the local police, she said.

35 Rescued, None Hurt After Ceiling Collapses At Building In South Mumbai