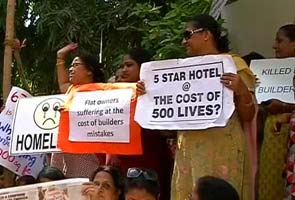 Mumbai: 140 families of a highrise residential complex in south Mumbai, whose homes were set to be demolished, got some relief from the Supreme Court today. The top court stayed the demolition and gave the flat-owners five months to vacate.

The Campa Cola Compound in posh Worli had been the scene of a massive protest all this morning, with the civic authorities expected to start the demolition under heavy police presence. Hundreds of residents formed a human chain to block entry to the complex. The gates of the compound were shut and women squatted outside. School children too joined the protests.

Celebrations broke out among the residents after the court's verdict. At a press conference later, one of them said: "These five months mean 50 years to us."

Seven highrises were constructed at the Campa Cola Compound between 1981 and 1989. The builders had permission for only six floors, but constructed way too many. One of the buildings, Midtown, has 20 floors. Another building, Orchid, has 17.

Mumbai's civic body had decided to bring down the 35 illegal floors in the seven highrises after the Supreme Court, in an earlier order, refused to regularise them.

Milind Deora, the Congress MP from Mumbai (South) had taken up the residents' cause. "I have impressed upon the Chief Minister to give the residents more time before the demolitions take place. We should see what was the builders' role has been," he said.

GR Khairnar, former municipal commissioner of Mumbai, visited the Campa Cola Compound today in support of the residents. "They deserve some compassion. Alternate arrangements should have been made for them," he said.

Promoted
Listen to the latest songs, only on JioSaavn.com
Amid the protests, the residents had been preparing for the worst. "Please don't break my house. I want to stay here with my children," said Kamal Parikh, whose home of 22 years faces the civic body's hammers.

Sitanshu Parikh, another resident, said: "This is the place where I grew up. I used to play here. All my friends are here, how can I leave?"