He was 85 and breathed his last at the Hinduja Hospital late on Wednesday where he was admitted five days ago. 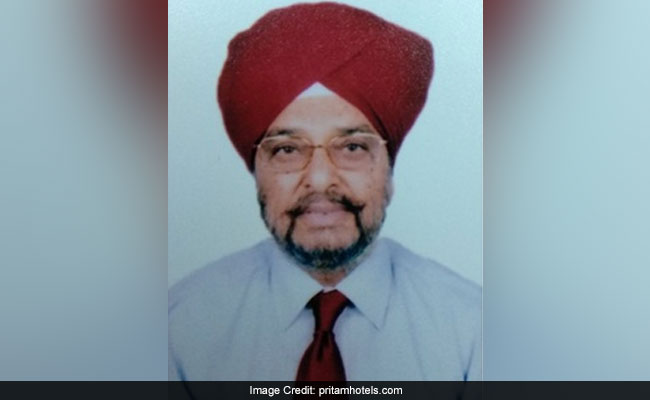 Kulwant Singh Kohli was appointed Sheriff for one term in 1998.

Former Sheriff of Mumbai, Kulwant Singh Kohli, the legendary hotelier who introduced 'butter chicken' to Mumbaikars in the 1960s and patriarch of the Pritam Group of Hotels, passed away following a brief illness, family sources said here on Thursday.

He was 85 and breathed his last at the Hinduja Hospital late on Wednesday where he was admitted five days ago.

Kohli, who was appointed Sheriff for one term in 1998, is survived by his wife, Mohinder Kaur, sons Amardeep, Gurbaxish and daughter Jasdeep Kaur.

The last rites shall be held at the Shivaji Park crematorium this evening.

"He was a lively and cheerful person, a successful business leader, he was a witness to the socio-cultural and economic development of the state," said Governor Rao.

He recalled Kohli's services in the forefront of social and religious events organised by the city's Sikh community.

"He was the pride of the community, his social work vast and varied. In his demise, Mumbai has lost a popular 'Samaj Ratna'," Rao said.

It was way back in 1942 that a Rawalpindi entrepreneur Prahlad Singh Kohli - the father of Kulwant - came to the erstwhile Bombay to start a small Punjabi eatery, 'Pritam Hotel' in Kalbadevi, but it failed miserably and he was left virtually penniless.

Not losing heart, he bought another place in the labour-class dominated Dadar in central Mumbai, optimistic that the upcoming Bollywood clientele would help him flourish.

With many studios in south Mumbai and the still infantile suburbs cradling the success of the film industry, the Pritam Hotel also thrived, with the menu lovingly supervised by his wife, Harkaur.

In 1953, the young Kulwant, then barely 11, reluctantly joined his father in the business in Mumbai. Armed with his soft demeanour, pleasing manners and helpful nature, he soon became popular with the film industry folks and even leading politicians of the era.

Kulwant Singh Kohli also went out of his way to help the struggling actors of that time by feeding them meals at subsidised rates - Rs 19 a month once a day Rs 38 for twice daily.

As the hotel's name spread far and wide, the Kohlis expanded the place by buying out neighbourhood properties to offer a restaurant, a typical Punjabi-style 'dhaba', fine-dining, a full-fledged four-star residential Hotel MidTown Pritam, etc.

Kohli's dear friend Raj Kapoor honoured his phone call and came to inaugurate the renovated and centrally-airconditioned Pritam Hotel in 1975, kicking off the trend of fully airconditioned eateries which picked up in a big way and is common today.

Kohli prided himself on introducing authentic 'butter chicken' to the the Mumbaikars in the 1950-1960s, which was a raging hit and now a 'must-item' on all city restaurant menus.

Around 1985, his sons introduced the 'dhaba' concept to the city with an open-air extension to the existing restaurant, 'khatiyas', charpoys, an open kitchen and friendly service, which went down well with the Mumbaikaris.

His closeness to Bollywood players saw him working with some top stalwarts behind the screen by launching Sangeeta Films Corporation which acquired world distribution rights for some of the top films of that era like "Pakeezah", "The Burning Train" and several others.

The management of Pritam Group of Hotels today announced that all restaurants will remain closed till July 21 as a mark of respect to the departed founder.

(Except for the headline, this story has not been edited by NDTV staff and is published from a syndicated feed.)
Comments
Kulwant Singh KohliPritam Group of HotelsButter chicken