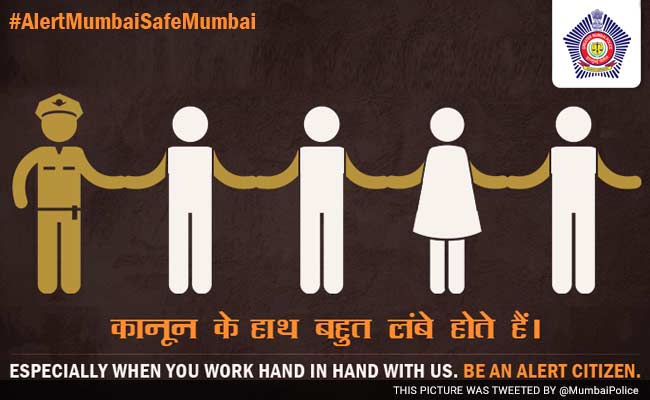 Mumbai: A smart Mumbai Police tweet on Wednesday morning is drawing attention both for the way it is worded and the hashtag it uses. #HoshMeinAao or 'come to your senses'.

The office of the Commissioner of Police, Mumbai, Ahmed Javed tweeted and the Mumbai Police handle retweeted:

If you roll, we will weed you out. #HoshMeinAao

The context was established by the tweet that preceded it, by minutes.

"Ha ha ha," is the most common response this morning, amid some witticisms and word-play in return, all largely appreciative of the force's effort to be fun as it polices.

The anti-drug campaign this morning is only the latest in a series of catchy tweets from both the Mumbai Police and the Commissioner's official handles. They have earlier tweeted,

Earlier this month, the Mumbai Police ran a #CyberSafetyWeek campaign with snappy one-liners and colourful graphics.

We know you're lucky, but believing a million $ is just a click away, is pushing your luck too far #CyberSafetyWeekpic.twitter.com/pX2idLf3Zm

Your creepy comments on her photo will get you a long date with us. #CyberSafetyWeek

An online stranger can be a potential real life danger #CyberSafetyWeekpic.twitter.com/oWu4lfgOwf

There have been many campaigns the Mumbai Police has run on Twitter since it joined the micro-blogging site December 16, 2015, never quite pulling its punches. In its traffic safety campaign it had punned on helmets and "hell-met" and observed, "What's the point of having a bike if you can't ride it later?"

That one with a hashtag #Notcool.

Someone at the Mumbai Police office is definitely cool on Twitter.