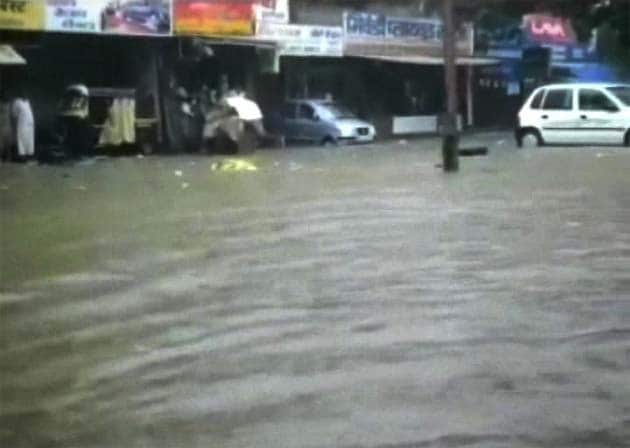 Mumbai: Heavy rains continued to lash Mumbai and most parts of Maharashtra for the second consecutive day today, impacting normal life across the state.

Road and rail traffic has been affected in Mumbai since morning, hitting the office-bound commuters.

Railway tracks have been flooded at various points on the Central Railway and Western Railway networks serving the city.

Although services have been delayed by up to 30 minutes, there has been no major dislocation so far.

However, owing to heavy rains in northwest Maharashtra and south Gujarat, train services on the Mumbai-Ahmedabad and Mumbai-New Delhi sectors were affected since early morning, according to officials.

Valsad in south Gujarat was among the worst-hit with two feet water-logging in the station, preventing movement of local and long-distance trains.

A railway official said that several trains in both directions on the two routes (Mumbai-Ahmedabad and Mumbai-New Delhi) have been regulated at various stations until the water levels recede.

In adjoining Thane district, railway tracks were flooded at Nalla Sopara, Mumbra, Thane, Diva and other places, leading to train delays on all the routes.

In Mumbai, several low-lying areas have been waterlogged in the city and suburbs, hitting vehicular movement badly.

An extra high tide, measuring 4.26 metres, is expected from 2.30 p.m. onwards and officials are apprehensive the situation could worsen if the rainfall continued.

According to Mumbai Weather Bureau, since 9 a.m., south Mumbai received an average one cm while suburbs averaged 1.62 cm rainfall.

Promoted
Listen to the latest songs, only on JioSaavn.com
Weather Bureau Director V.K. Rajeev said that heavy rains are expected to continue lashing Mumbai, coastal Konkan and other parts of the state for the next two days.

Till date, Mumbai city has received nearly 55 per cent and suburbs averaged 47 per cent of the annual rainfall quota.