Mumbai rains today: Four teams of the NDRF have deployed on the outskirts of Mumbai and other parts of the state for search and rescue operations.

Waterlogging in Chembur area after heavy rain in Mumbai.

Air and rail traffic was disrupted in Mumbai, the financial capital of the country, after heavy rain continued overnight. Eleven flights were cancelled this morning at the Mumbai airport due to fluctuating visibility. Several flights were diverted too. A train carrying more than 700 passengers was stranded in Badlapur amid heavy downpour.

After Mahalaxmi Express was held up between Badlapur and Wangani, the RPF or the Railway Police Force and cops from Mumbai police reached the site this morning to give the passengers food and water. A team from the National Disaster Response Force has been deployed for the evacuation of passengers.

Earlier this morning, Central Railways gave an update on the train services in a tweet. "Services are running in all sections except Kalyan-Karjat/Khopoli due to heavy rainfall leading to overflowing of Ulhas river between Ambarnath-Badlapur-Vangani (sic)," the tweet read. 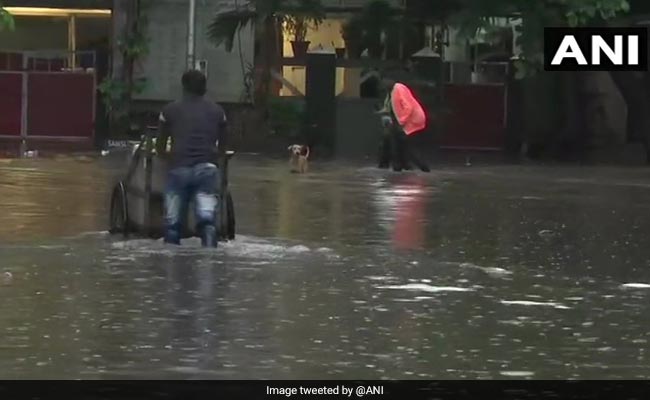 Roads in Sion were waterlogged after heavy rain last night.

Four more teams of the NDRF have deployed on the outskirts of Mumbai and other parts of the state for search and rescue operations.

Visuals showed locals struggling in several parts of the city, including Sion and Chembur, where water-logging brought life to a standstill last night. Water has now receded in most areas of the city.

The city has been receiving heavy rainfall since Friday, which led to massive waterlogging and traffic jams across the city. Waterlogging was also reported outside the domestic airport departure gate leading to hassles for passengers who managed to reach the airport after being stuck in traffic jams for two-and-half hours on the Western Express Highway.

Many locals tweeted about how the heavy rains brought back memories of July 26, 2005, when the large parts of the city was inundated after a cloudburst.

On this same day in 2005, Mumbai had drowned! Ironically, it feels the same today! I have never experienced such heavy rains before! God bless Mumbai!#MumbaiRainlivepic.twitter.com/JKc9WDbT6u

The intensity of the rain will only start decreasing from Saturday afternoon or evening, private weather forecaster Skymet has predicted.