Read inOther Languages
This Article is From Jul 28, 2019

Heavy traffic jams are also being reported from arterial roads like the Western Express Highway.

Seventeen flights were diverted and many delayed by up to an hour in Mumbai on Friday evening due to heavy rain and low visibility. There was massive waterlogging and traffic jams across the city, with no respite from the heavy downpour. The intensity of the rain will only start decreasing from Saturday afternoon or evening, private weather forecaster Skymet has predicted.

Flights from the international airport in the city have been delayed by 30 minutes on an average due to heavy rain.

Along with peak hour traffic, Western Express Highway was badly affected due to the rain with those heading to airport worst affected. On a normal day, the traffic crawls and the rain during peak hour made it worse.

Waterlogging was also reported outside the domestic airport departure gate leading to hassles for passengers who managed to reach the airport after being stuck in traffic jams for two-and-half hours on the Western Express Highway. 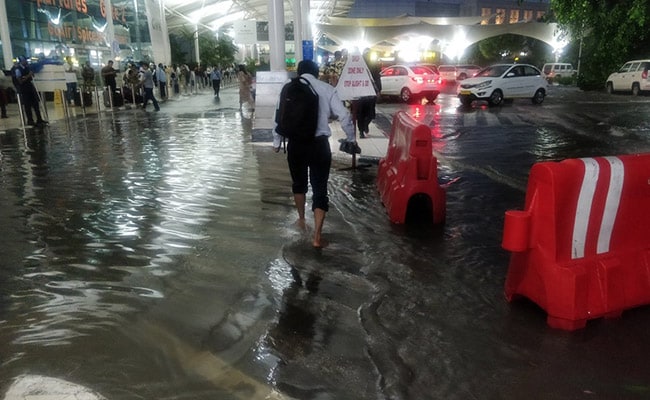 Waterlogging outside the domestic departure gate of the Mumbai airport

Mumbai's civic body, the Brihanmumbai Municipal Corporation or BMC, has warned people that severe thunderstorms accompanied by lightning and string surface winds exceeding up to 70kmph is likely to hit the city and its surrounding areas.

A part of a wall on the second floor of Khakhar Building in Mumbai collapsed due to the rain, but no injuries were reported.

With Friday being July 26, many Mumbaikars tweeted about how the heavy rains brought back memories of July 26, 2005, when the large parts of the city was inundated after a cloudburst.

On this same day in 2005, Mumbai had drowned! Ironically, it feels the same today! I have never experienced such heavy rains before! God bless Mumbai!#MumbaiRainlivepic.twitter.com/JKc9WDbT6u

The Indian Meteorological Department has predicted that isolated areas in Maharashtra, including Mumbai, Thane and Raigad, are likely to witness heavy downpour in coming days.