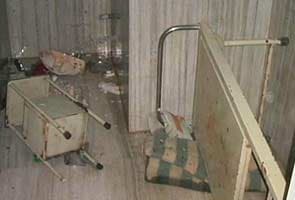 Mumbai: Shiv Sena MP Sanjay Raut has said that the party supports the arrest of the two young women who had commented on the shutdown of Mumbai after Sena supremo Bal Thackeray's death. "We support the police's action," Sanjay Raut said, "The Facebook comments could have led to a law and order situation."

The two women, faces covered with bright dupattas and fear palpable, had earlier today said they regretted the Facebook post, which said, "Respect is earned, not given and definitely not forced. Today Mumbai shuts down due to fear and not due to respect."

The girl who had posted the status said in a low voice, a blue and green dupatta pulled tight across her face, that, "I would like to apologise. He (Bal Thackeray) was a great man." Her friend, who had "liked" her post, too said she regrets doing that. Both women have had harrowing two days since they posted on Facebook.

Soon after their arrest, social media was abuzz with tweets and posts; most people demanded action against the policemen who arrested the two women and the miscreants, allegedly Shiv Sena workers, who vandalized the clinic of the uncle of one of the two women. Following the uproar, nine men were arrested last night. "Nine people were arrested late Monday night under various sections of the Indian Penal Code for rioting and vandalising... We are looking to make more arrests," a police official from Palghar, where the clinic was vandalised, said today.

On Sunday, the 21-year-old Mumbai woman shared her views on the shutdown of the city as Shiv Sena chief Bal Thackeray's funeral was being held. Her friend "liked" her post. At 10.30 am on Monday, they were arrested. They were then ordered by a court to serve 14 days in jail and, hours later, were allowed out on bail after paying two bonds of Rs. 15,000 each.

The woman had posted, "Respect is earned, not given and definitely not forced. Today Mumbai shuts down due to fear and not due to respect". A local Shiv Sena leader Bhushan Sankhe filed a police complaint and cops from the Palghar police station, two and a half hours' travel from Mumbai, arrested her and her friend.

When NDTV spoke to the two women today, they said they apologise for their post. They also said they would "think twice" before writing anything on Facebook again, but added that the treatment meted out to them was "unfair".

Mr Sankhe has told NDTV that he does not regret his decision to lodge a complaint against the women. He also admitted that he called one of them and asked her to delete her Facebook post because "it was against our beloved leader." He however added that he was not aware about the attack on the clinic.

Yesterday Shiv Sena's Rahul Narvekar, who heads the party's legal cell, had denied that the complaint was lodged by a Sena leader. "It is for the state administration and police department to investigate complaints that are lodged. I am not aware of any complaint filed by any shakha pramukh of Shiv Sena. We will have to look into it. Uddhav Thackeray has made an appeal to the cadre to maintain peace," he had said.

Soon after the women's arrest, about 30 or 40 men, allegedly Shiv Sena activists, ransacked an orthopedic clinic that belongs to the uncle of the young woman. They broke window panes, damaged equipment and ripped out beds and wash basins; there were two in-house patients at the clinic at the time. The police has shown none of the alacrity they did in arresting the two women, here; most of those who attacked the clinic are still at large.

Among the many tweets on the incident is that of activist-turned-politician Arvind Kejriwal who said, "Police officers who arrested the two girls in Mumbai shud be immediately dismissed. That's minimum that the govt ought to do." Minister of State (Communications and IT) Milind Deora added: "To learn who rules over you, simply find out who you are not allowed to criticize  - Voltaire."

The Maharashtra Police has ordered an inquiry, to be led by Sukhwinder Singh, Special Inspector General of Konkan range, into the arrest of the young women. Sources said top cops at the police headquarters in Mumbai were livid with the Palghar police. "We have ordered an inquiry...if any further action needs to be taken the probe team will decide and send a report. On this report we will act," Deven Bharti, IG (Law and Order), Maharashtra Police said.

Within hours of the arrest, Press Council of India chief Markandey Katju, demanded "immediate" action against the police personnel who arrested the women. In an e-mail to Maharashtra Chief Minister Prithviraj Chavan sent on Monday afternoon, Mr Katju warned of "legal consequences" if the Chief Minister failed to act. "I will deem it that you as CM are unable to run the state in a democratic manner as envisaged by the Constitution to which you have taken oath and then legal consequences will follow," Justice Katju said.

About five hours later, having not got a response, he emailed Mr Chavan again, this time telling him the "nation wants to know what action you have taken... Please realise that silence is not an option for you."

The two women were booked under Section 295 A of the Indian Penal Code (IPC) for "deliberate and malicious acts, intended to outrage religious feelings or any class by insulting its religion or religious beliefs." They were later also charged under Section 505 (2) of the IPC for making "statements creating or promoting enmity, hatred or ill-will between classes", and the police added Section 66 (A) of the Information Technology Act, which has been severely criticised for being authoritarian and stifling freedom of expression. Minister of State for Information Technology Milind Deora has, however, defended the law. "Question isn't about amending 66A of the IT Act, its about preventing misuse by the police, who clearly acted in haste & applied wrong. Also, vandals of Dhada Hospital must be booked! Hope Maharashtra Government takes immediate corrective action," Mr Deora tweeted this morning. The maximum sentence under these sections is three years in jail.

Promoted
Listen to the latest songs, only on JioSaavn.com
Shiv Sena chief Bal Thackeray's death on Saturday afternoon had brought the city to a virtual standstill for the weekend, with shops and other establishments shutting and taxis going off the roads, amid fears of violence by Mr Thackeray's supporters. There was, however, no untoward incident in Mumbai over the weekend. Mr Thackeray was cremated at the Shivaji Park on Sunday evening with nearly two lakh people in attendance.