Tired Of Her, Note In Blood Next To Body Said. Mumbai Cop's Son Arrested

Deepali Ganore was found dead in her Mumbai home earlier this week. Mumbai: As far as crime scenes go, the details rarely get more grisly than this. After stabbing a woman, the wife of a Mumbai police officer, several times with a kitchen knife, the killer left a note scrawled in her blood on the floor: "Tired of her, catch me and hang me." At the end of the sentence was a smiley face. The only arrest in the case so far: her 21-year-old son Siddhant.

Deepali Ganore, the wife of the police officer Dyaneshwar Ganore who had initially investigated the sensational Sheena Bora murder case, was found dead in her Santacruz home earlier this week. Mr Ganore had said he had found her lying in blood when he returned from work around 3:30 am on Wednesday. A knife and the message were next to her.

Their son Siddhant had been missing since the night of the incident. 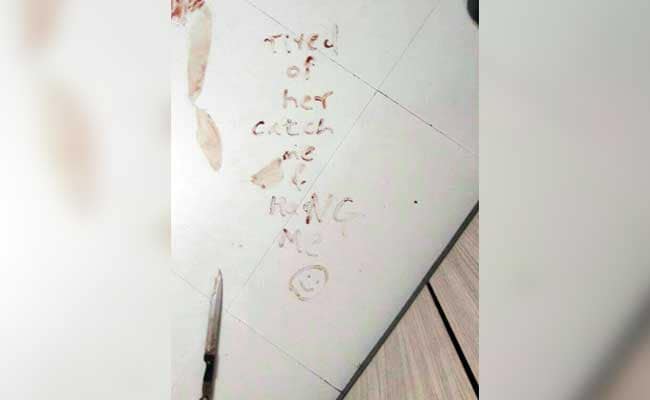 Deepali Ganore Murder: A macabre message was found next to the body in Mumbai.

The police say that on finding out that Siddhant had apparently fled to Jaipur, they immediately sent a team of three cops to catch him. "When our team reached Jaipur, we found that he had already left for Jodhpur. We shared his photo with the Jodhpur police who detained him there. He is now being brought back to Mumbai," said police officer Rashmi Karandikar.

Promoted
Listen to the latest songs, only on JioSaavn.com
The 21-year-old is expected to arrive in Mumbai today.

While police continue their investigation, Siddhant is yet to be made an accused in the case. The FIR or First Information Report still remains filed against unknown people.