Cyclone Tauktae is "very likely" to reach the Gujarat coast between 8 pm and 11 pm, according to the weather department. 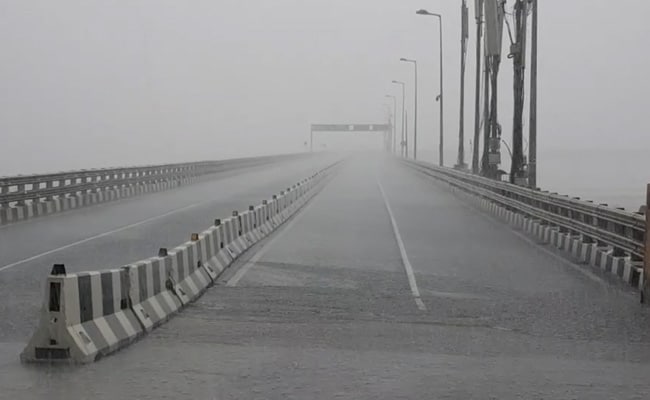 Movement of vehicles on Mumbai's iconic Bandra-Worli sea link has been suspended due to cyclone Tauktae which is currently 155 km west-northwest of the country's financial capital. The 'extremely severe cyclonic storm' is "very likely" to reach the Gujarat coast between 10 pm and 11 pm Monday evening, according to the weather department.

The decision was taken in view of the high speed winds, a senior official of the Brihanmumbai Municipal Corporation (BMC) said.

As a precautionary measure, Mumbai Monorail has suspended all the operations for a day. "This was a prompt decision taken for the safety of the commuters. We regret any inconvenience caused," Mumbai Monorail said in a tweet.

Dear Mumbaikars, Bandra-Worli sea link will be closed to commute till further update.

Please take alternate routes if at all you plan to move out.

The best plan however is to stay indoors today unless it's absolutely unavoidable#CycloneTauktaehttps://t.co/eJD55GEyeJ

Mumbai airport has been closed till 6 pm. Three flights - one SpiceJet (diverted to Surat), and two IndiGo (one returned to Lucknow and another diverted to Hyderabad) have been affected.

The island city received 8.37 mm rainfall between Sunday 11 pm and Monday 7 am, while the eastern and western suburbs received 6.53 mm and 3.92 mm downpour, respectively, during the same period, according to the BMC.

Light spells of rain continued since 7 am on Monday, a BMC spokesperson said, adding that there was no water-logging anywhere in the city.

On Sunday, the weather department issued an orange alert for Mumbai, predicting heavy to very heavy rains at isolated places with strong winds on Monday.

According to civic officials, the National Disaster Response Force (NDRF) and the Indian Navy were on alert as Cyclone Tauktae intensified to a very severe cyclonic storm and was passing close to Mumbai.

Six flood rescue teams of the Mumbai fire brigade were deployed at chowpatties and five temporary shelters each were kept ready in 24 civic wards of the city to shift citizens there if required, they said.

Cyclone Tauktae is "very likely" to reach the Gujarat coast between 10 pm and 11 pm, according to the weather department. Around 25,000 people have been evacuated from low-lying areas between Porbandar and Mahuva in Gujarat's Bhavnagar district in anticipation of landfall.

Cyclone Tauktae: Two Barges With 410 On Board Adrift Near Mumbai