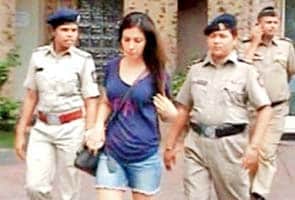 Mumbai: Twelve hours after she was detained, fined and let off for playing loud music in her apartment, model and Bollywood actress Anjum Nayar, who was last seen in the 2011 movie Cover Story, was re-arrested at 4.30 pm yesterday.

Sending out a strong message that abuse and misbehaviour will not be tolerated against upholders of the law, the Oshiwara police booked her for directing a tirade of foul-mouthed abuse at police officers, which was filmed by a neighbour, and then passed on to the cops.

After watching the footage, the police consulted with their superiors and they arrived at a decision to take stringent action in the matter.

Nayar has been booked under sections 353 (assault or criminal force to deter public servant from discharge of his duty), 504 (intentional insult with intent to provoke breach of the peace), 506 (punishment for criminal intimidation) and 294 of the IPC. She will be produced before the court today.

At 1.30 am on Monday, the police control room relayed information to the local police station that neighbours were complaining of loud music emanating from the 20th floor flat at Samartha Angan building in Andheri (West).

Two beat marshals arrived at the flat, but to their bewilderment, an intoxicated Nayar started using profanities repeatedly, even directing expletives at the city's police commissioner.

The stricken cops then called for woman constables to deal with the situation. Fifteen minutes later, two lady constables arrived at the spot and Nayar was hauled off to the police station where she was booked, fined and released at 5 am.

The entire fracas was, however, captured by a neighbour who later showed the recording to the police who in turn informed their higher-ups of the footage.

After a few hours of consultation, Nayar was called back to the police station and re-arrested. "We have arrested the model for abusing and misbehaving with our officials and subsequently abusing the commissioner. She was drunk during the time of incident. We had gone to her home after receiving a complaint from the control room," said Nasir Pathan, senior police inspector, Oshiwara police station.

A constable from Oshiwara police station, on condition of anonymity, said, "She was continuously abusing us while we were taking her to the police station. Moreover, after reaching the station, she started threatening us by saying she will complain against us to the top officers.

Promoted
Listen to the latest songs, only on JioSaavn.com
Meanwhile, Nayar is alleging that she was slapped by the women constables, and ill treated by the police. Nayar said that she was with a few friends in her apartment enjoying some wine and soft music when the cops knocked on her door. She claims that the music was so soft that it could not be heard even in the next room. Despite this, the officers misbehaved with her and also slapped her, which forced her to retaliate.

She said that the female constables started beating her from her flat till the police station and after reaching there, the on duty police officer too misbehaved with her. She has, however, accepted that she had consumed alcohol, but claims she was not drunk.
Comments
Anjum NayarMumbai