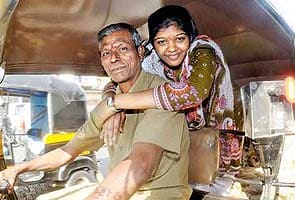 Mumbai: The dream of a lifetime materialised for Prema Jayakumar yesterday, when the 24-year-old topped the nation-wide Chartered Accountancy exam in her first attempt. Prema, whose father drives an auto for a living, is now determined to use the milestone as a stepping-stone towards providing her parents with a life of comfort.

Prema's four-member family squeezes itself into a 300 sq ft room in S B Khan Chawl, Malad. Beaming over her success after the results were declared yesterday, she said, "The day I start working, I will ensure that my father can rest at home. He has always toiled for my welfare." Prema, who outshone her peers in academics since her school days, scored a remarkable 607 on 800 in the CA exam.

This is not her first stint on a toppers' list: she scored 90 per cent in her Third Year B Com exams from the University of Mumbai, standing second. Prema said that she owed a debt of gratitude for the professors at her college and coaching institute, who had worked hard with her. The graduate from Nagindas Khandwala College completed her M Com from the University of Mumbai.

She said, "Fees were never an issue in school or college. In my school days I used to get a scholarship, and the college fees were nominal. My father Jayakumar Perumal is from Tamil Nadu, and has been driving an auto for 20 years. My mother used to work for a private company. She stopped working when I grew up and started earning during my articleship. I also received a scholarship of Rs 40,000 from my coaching institute, so fees were never a source of worry for my parents or me."

While achieving her own personal goals, Prema has also been a guiding force for her 22-year-old brother Dhanraj, who also cleared his CA exam this year with his sister in his first attempt.

"We registered together with the Institute of Chartered Accountants of India and appeared for the exam in November 2012. My brother completed his TY B.Com in 2010. But he started studying for the CA exam after his HSC. He managed to gather registration fees for the exam by working at a call centre while completing his degree course."

Prema added, "My father's income was never fixed. He used to earn around Rs 15,000 every month. We used to earn Rs 5,000 per month during our articleship. My parents didn't study beyond school, so they are very proud that both their children have opted for higher education."

After completing her B Com in 2008, Prema appeared for the Common Proficiency Test (CPT) entrance organised by the ICAI in December 2008. In November 2009 she cleared both groups of the Integrated Professional Competence Examination (IPCE) which made her eligible for two-and-a-half years of articleship. The stint made her eligible for her CA final."

Dhanraj said, "My parents earned well as they both use to work. Money wasn't an issue as we also started earning when we grew up. Our articleship helped us to pay our registration fees for the CA exam. My sister was so intelligent that she earned her fees from scholarships. We both took leave from our articleships before the exam.

We always studied together as that helped us to discuss our problems with each other. My sister is my inspiration and it is she who helped me to clear the exam. Our neighbours were very supportive and maintained peace when we studied."

The siblings shared tips for success in the tough exam

Promoted
Listen to the latest songs, only on JioSaavn.com
"I have noticed that people fail their CA exams many times. We used to study from 7.30 am till 12 midnight. We used to rest at night. Sleep is very important when you are studying hard the whole day. If the person doesn't rest adequately then exhaustion will hamper preparations. We used to take a single break for lunch. We used to watch TV for half an hour before going to bed, just to relax," said Dhanraj.