After Mumbai March, Farmers Say "This Is Not The End"

Agitating Maharashtra farmers, while welcoming Devendra Fadnavis government's promises, say they will be back if all of their demands aren't met. 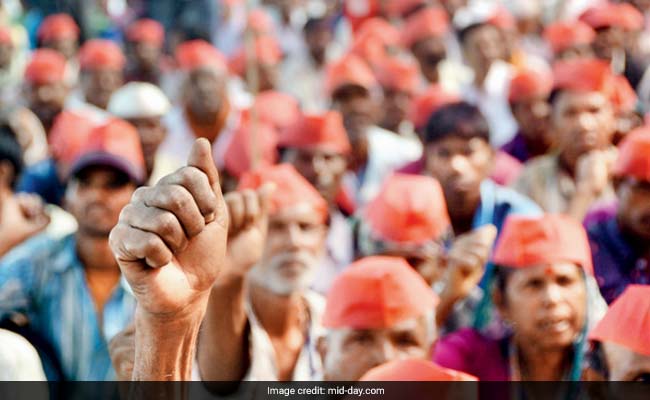 The epic 180-km walk has been completed peacefully, the demands have been met, and the deal signed and closed, on Monday. But, wait, this is not the end. The farmers will be back.

"We have only taken the first instalment and will be back in full strength soon to collect the second," vowed Ajit Nawale, state general secretary of All India Kisan Sabha (AIKS), while addressing the protesting farmers on Monday. The 25,000-odd farmers were set to return to their homes on Monday night after completing their journey that started from Nashik on March 6 and ended at south Mumbai on Monday morning. Their last leg started at 2am on Monday from Sion's Somaiya Grounds and ended at 5 am at Azad Maidan. Irrigation and Education Minister Girish Mahajan, too, marched with the protesters.

The farmers erupted in joy on hearing the positive response to a majority of their demands such as increasing crop prices, tribals to be taken care during river-linking and easing people's distress over land dispute.

The non-committal response to the loan waiver issue put a damper on the celebrations. Nevertheless, the agitation ensured third-party supervision of the loan waiver scheme by having a member from AIKS on a panel that will expedite disbursement of the money.

The leaders who headed the farmers' delegation before the government authorities, informed the protesting farmers that loan waivers would be done in four phases and that the first phase was accomplished by getting the government to realign the stringent norms that stopped farmers from getting their due. 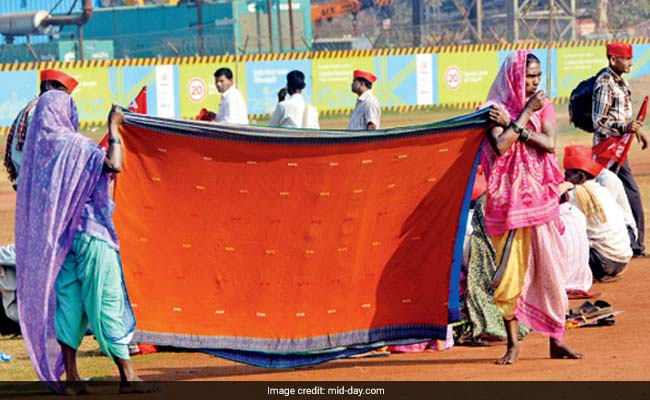 After a long march, farmers at Azad Maidan on Monday

Even as the tired farmers tried to rest at Azad Nagar after their long walk, they were kept charged up by back-to-back speeches by several representatives from various districts of Maharashtra. Food and water was brought to them by various organisations and political parties.

Immediately after the meeting ended at Vidhan Bhavan, the delegation of leaders heading the protest rushed to Azad Maidan to inform the farmers. Ajit Nawale, said, "The Kisan Sabha had demanded a complete loan waiver for farmers. However, the conditions because of which farmers were not given the benefits have been changed and we have made a lot of progress in this fight. We will return soon to ensure total loan waiver and that the 7/12 is completed."

Major Opposition parties and the BJP's frenemy, Shiv Sena, who had failed in the past to get the government to meet any demands, were seen competing with each other to extend support to the agitation. While the Congress and NCP tried to woo the farmers' with an eye on the upcoming Lok Sabha and assembly elections, the Shiv Sena decided to woo with food. "The fact that it is a successful rally that got the farmers their rights has got everyone's attention, even the Opposition's, which was long overdue. But, a lot is yet to be done to help them," said P Sainath, social activist and journalist.

BMC does its bit

* 35,000 litres of water (four tankers of drinking water and three tankers for toilets)

* 20 labourers to sweep and keep the premises clean

* Claims of land ownership will be settled in six months. A mechanism will be put in place to control and expedite the process

* The water that flows out to the Arabian Sea from Nar-Par, Damanganga, Wagh and Pinjal rivers will be diverted to the Girna and Godavari basins. Maharashtra's share of will not be given to neighbouring Gujarat. A draft MoU to this effect has already been submitted to the Centre. Some small irrigation projects will also be built to provide water to tribals

* Temple land will be restored to farmers who are tilling it and their heirs after a government-appointed committee submits its report. The encroached land, including grazing tracts, will be freed in the next six months.
The ownership of land, which has no claimants, will be decided.

The Centre will be asked to implement recommendations of the Swaminathan Commission. Farmers denied relief in the 2008 loan waiver scheme, will benefit from the ongoing scheme. Defaulters between 2016 and 17 will have a separate scheme. Husband, wife or both and their minor children will be given a waiver of Rs 1.5 lakh. However, a demand for considering each member of the family as beneficiary will be decided in 45 days, after considering the financial impact of it. The deadline for submission of application for the current scheme has been extended to March 31, 2018. Along with crop loan, a proposal for a term loan of R1.5 lakh will also be considered for farming, animal husbandry, shed net and poly house.

* A decision has already been taken to support the farmers whose standing crops were affected by bollworm pest and hailstorm. Compensation is being disbursed

* Milk procurement price will be increased and minimum support price for agricultural produce will be ensured.

* Honorarium in several social support schemes will be revised. Medical certificates for eligible candidates will be issued by trained doctors on a pre-assigned day. Torn ration cards will be replaced, and members will be added or deleted in six months. The department secretary will probe complaints, if any.

* Permission of the gram sabha is not needed for land acquisition for most important public projects, but the farmers concerned will be consulted. However, the gram sabha's permission is necessary for private projects and other things.
Dharmendra Jore

* Claims of land ownership will be settled in six months.

* The water that flows out to the Arabian Sea from Nar-Par, Damanganga, Wagh and Pinjal rivers will be diverted to the Girna and Godavari basins.

* Temple land will be restored to farmers who are tilling it and their heirs after a govt-appointed committee submits its report.

* Farmers denied relief in the 2008 loan waiver will benefit from the ongoing scheme. Defaulters between 2016 and 2017 will have a separate scheme.

Promoted
Listen to the latest songs, only on JioSaavn.com
(Inputs by Dharmendra Jore)