A Letter, 100 Tweets Had Warned About Mumbai Bridge Where 22 Were Killed

Overcrowding has caused many deaths on Mumbai's local train network, according to a report. In the past six months, close to 1,600 people have been killed; most of them fell off trains and a few died while crossing railway tracks. 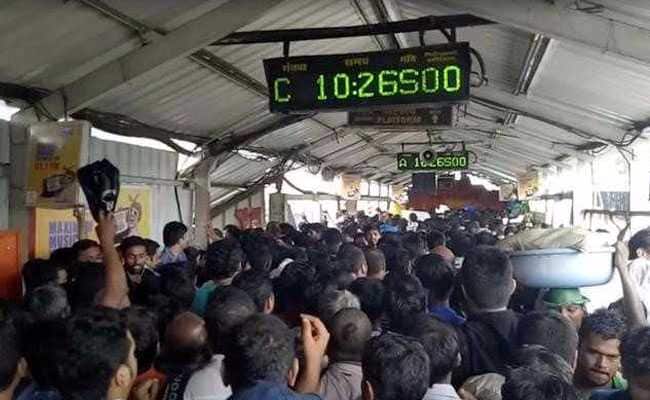 Elphinstone Station Stampede: There were more than the usual people on the bridge at the time.

MUMBAI: A city that will soon have a bullet train doesn't even have a safe railway bridge, commented angry residents in Mumbai after a stampede left 22 dead and over 30 wounded this morning.

The bridge connecting the busy Elphinstone Road and Parel train stations is always overcrowded, and over the years, there have been multiple warnings of a disaster waiting to happen.

Many had tweeted their concern. This tweet tagging former Railways Minister Suresh Prabhu and Prime Minister Narendra Modi over a year ago was almost prophetic.

In the last four years, there had been over 100 tweets talking about a risk of a stampede or accident due to the overcrowded bridge.

If any @IndianRailUsers dies coz of stampede Parel station, who would be rspnbl 4his death? @sureshpprabhu@PMOIndiapic.twitter.com/4KuP5tmSVu

Pre-rush hour Parel station. The only staircase which people use to exit and enter the station. A major accident is waiting to happen. pic.twitter.com/FWMrTboh4a

This morning, many events collided to produce the tragedy that they had feared.

Four trains arrived around the same time, and a huge crowd tried to get out. The bridge was already crowded after sudden, heavy rain that had people scurrying for cover. Some say a loud bang after a short circuit led to panic. A witness said there were rumours of the old bridge collapsing. Within moments, many were crushed and injured.

Hours later, the Railways Minister tweeted that bids had been called today for a new, wider bridge that had been sanctioned last year.

"People do not need an expensive bullet train...first repair these bridges that we use every day," said a survivor.

Among the most cutting political reactions to the tragedy came from the ruling BJP's ally Shiv Sena.

"You have money for bullet trains, but not for repairing the bridge...You let the poor passengers die...and for moneyed passengers, you talk about bullet trains," said the Sena's Sanjay Raut, calling the stampede a public massacre.

In his reply in February 2016, Mr Prabhu had assured that the bridge would be extended and widened. He had also cited "paucity of finances, operational constraints or other compelling circumstances" for the inability to respond to such requests.

Over a year later, no work has been done on the bridge. Mr Sawant said today: "This is not just negligence. It's too soft a term to use. This is delinquency."

Piyush Goyal, who took over the Railway Ministry earlier this month after a series of train accidents, said:  "I have issued directions for safety and capacity audit of foot over bridges in Mumbai where there is congestion. Wherever there is a need for foot over bridges to be widened, we will do it immediately on high priority."

Promoted
Listen to the latest songs, only on JioSaavn.com
Overcrowding has caused many deaths on Mumbai's local train network, according to an Observer Research Foundation report. In the past six months, close to 1,600 people have been killed; most of them fell off trains and a few died while crossing railway tracks.

Minister of State for Railways, Manoj Sinha, said the incident does not raise any questions about the structural safety or design of the bridge.