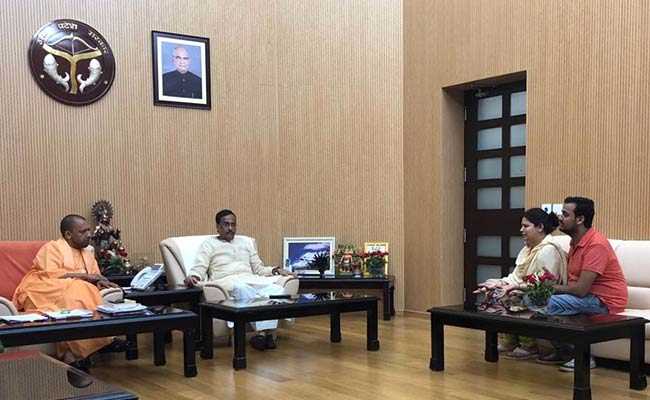 The family of the Apple executive Vivek Tiwari, who was killed by two former cops, met with Uttar Pradesh Chief Minister Yogi Adityanath today. Vivek Tiwari died after he was shot at by a police constable in Lucknow on Saturday after he allegedly refused to stop his SUV for police checking. The constable and his colleague have been arrested and a murder case has been registered against them. Brijesh Pathak, the state's law minister, has lent his voice to accusations of a cover-up by the police.

Here are the updates on the Vivek Tiwari murder case:

Oct 01, 2018 13:20 (IST)
BSP supremo Mayawai has attacked the BJP over Vivek Tiwari's murder, asking the government to act against the cops involved. Oct 01, 2018 11:51 (IST)
To read more on the meeting between Yogi Adityanath and Vivek Tiwari's family, click here
Oct 01, 2018 11:07 (IST)
The Uttar Pradesh Deputy Chief Minister has annonced Rs 25 lakh for the family, including a Rs 5 lakh deposit for Vivek Tiwari's kid's education and Rs 5 lakh deposit for his mother. "This is a sad incident. We are with the family," he said
Oct 01, 2018 10:58 (IST)
"He heard what I had to say and assured help. I had earlier also said that I have faith in our state government, and today that faith has strengthened," says Kalpana Tiwari, Vivek Tiwari's wife, after meeting with Uttar Pradesh Chief Minister Yogi Adityanath
Oct 01, 2018 10:54 (IST)
Yogi Adityanath had earlier said that a CBI probe would be ordered into the murder case if required and that the guilty would not be scared. He also clarified that the incident was not an encounter
Vivek TiwariApple executive murder