The protests at the Clock Tower in the old Lucknow area against Citizenship (Amendment) Act and the NRC started on Friday and have continued with hundreds of women braving the chill to take part in it. 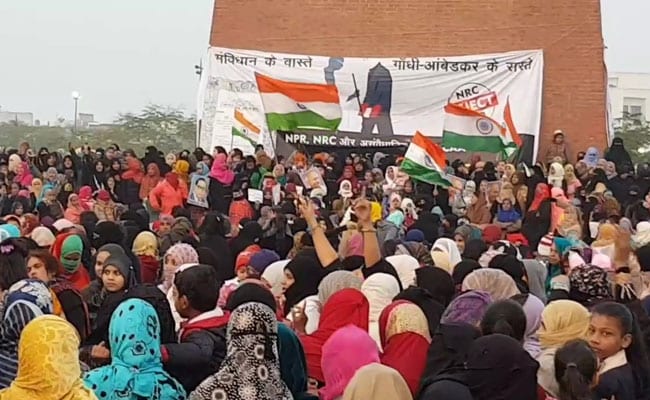 CAA protests at the Clock Tower in Lucknow have been going on since the last five days. (File)

Daughters of renowned Urdu poet Munawwar Rana were among the 160 women booked by the police for allegedly defying prohibitory orders and taking part in the protests against the Citizenship (Amendment) Act (CAA) and National Register of Citizens (NRC) in Lucknow, officials said on Tuesday.

The protests at the Clock Tower in the old Lucknow area against Citizenship (Amendment) Act and the NRC started on Friday and have continued with hundreds of women braving the chill to take part in it.

The district administration has booked 160 women, including two daughters of Mr Rana, for defying the orders on Monday night.

"Prohibitory orders are in force. Yet women have been staging protests. This amounts to defying the orders and three cases have been lodged at the Thakurganj police station in this connection," Additional Deputy Commissioner of Police (West Zone) Vikas Chand Tripathi said.

Fauzia and Sumaiya, daughters of Rana, have been named in one of the FIRs, he said.

Besides the Clock Tower, where protests have been going on for the past five days on the lines of Delhi's Shaheen Bagh, another protest by women was staged in Ujariaon area of Gomti Nagar on Monday evening against the CAA and the NRC.

Over a dozen women staged sit-in near a dargah, holding placards showing anti-CAA, NRC slogans. When asked to vacate the area, they resorted to sloganeering against the citizenship law, the police said.

A police team which rushed to the spot urged the women to go home citing prohibitory orders but they did not relent, the police said.

Jaibunisa, a protester, said, "The intention of the government is not correct as far as the CAA and the NRC are concerned. India is the largest democracy in the world but the current government is ignoring a section of its population. What is saddening is the fact that it is not even listening to the pleas."

Another protester, Nazia Sheikh, said, "What is the reason that the Centre does not want to soften its stand. Muslims have sacrificed the most in the country''s freedom struggle. Why does the government wants to push them into dark?"

Urdu poet Munnawar Rana on Tuesday argued that a rally addressed by Union Home Minister Amit Shah violated the prohibitory orders, just as his daughters are accused of doing.

On Tuesday, Mr Shah held a public meeting in another part of the city in support of the CAA.