At state government's ''Misti Hub'' in the northeastern fringes of the city, new varieties of Rosogollas have been displayed at the outlets of popular sweetmeat brands. 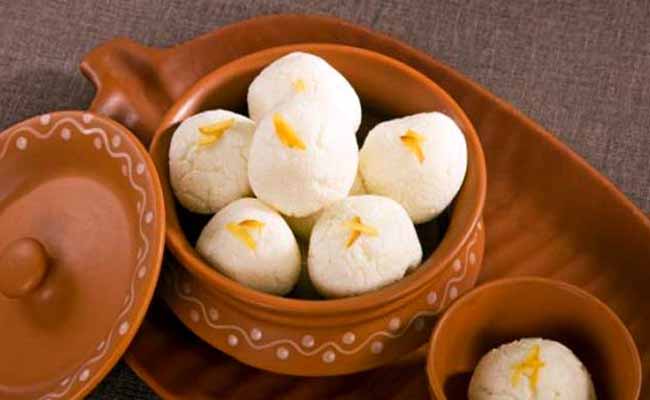 On November 14, 2017, West Bengal received the GI tag for Rosogolla.

''Rosogolla Dibas'' (Rasgulla Day) was celebrated in West Bengal on Thursday to mark the granting of Geographical Indication (GI) tag of ''Banglar Rosogolla'' to the state on this day two years ago.

The statue of Nobin Chandra Das, inventor of the Bengal variant of the sweetmeat, at Baghbazar area of north Kolkata was garlanded in the presence of state minister Sashi Panja, said Dhiman Das, a descendant of Nobin Chandra Das and owner of KC Das.

Street children and inmates of shelter homes near the residence of KC Das (Krishna Chandra Das), son of Nobin Chandra Das, at Gourimata Udyan Park in the northern part of the city were treated to Rosogollas on the occasion, Dhiman Das said.

"For the first time in the history of the sweetmeat industry in West Bengal, almost all sweet shops in the state are dedicating this day to Rosogolla," he said.

At state government's ''Misti Hub'' in the northeastern fringes of the city, new varieties of Rosogollas have been displayed at the outlets of popular sweetmeat brands, an official of the West Bengal Housing Infrastructure Development Corporation (HIDCO), that runs the hub, said.

Hundreds of people were treated to the sweetmeat at an event at Khadina More in Hooghly district, said Amitava Dey of ''Felu Modak'' and an office-bearer of Paschim Banga Mistanna Byabasayee Samity (West Bengal Sweetmeat Traders'' Committee).

"The centuries-old truth was vindicated by the GI tag," Mr Dey said, adding that this year's celebration was on a scale grander than last year.

A GI tag identifies a product as originating from a particular region.

West Bengal and Odisha were involved in a tug-of-war to stake a claim to the origin of the sweetmeat.