The decision not to hold the Special Convocation has been taken at an Executive Committee meeting in the wake of the threat of Left students' bodies to show black flags to Chancellor and Governor Jagdeep Dhankhar. 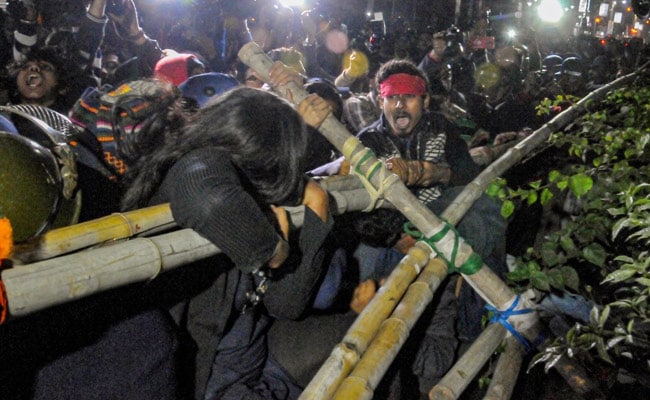 Jadavpur, Presidency and other college students break the barricade in front of BJP headquarters.

West Bengal Governor Jagdeep Dhankhar, who is also the chancellor of the state universities, today expressed dismay over Jadavpur University's (JU) decision to put on hold its special convocation.

No decision about the special convocation, which was slated on December 24, can be taken without the approval of the chancellor, he said.

Mr Dhankhar said this was the fifth instance when meetings or convocations in different universities in the state had been cancelled.

"This trend indicates massive politicisation and fear by the present government," Mr Dhankar, who is at loggerheads with the TMC government in the state over a number of issues for the past several months, said.

"I am extremely pained, disturbed and worried as brick by brick destruction of education is happening in the state," he said after receiving the cancellation letter from JU.

JU authorities cited boycott by students, who have threatened to show black flags to the chancellor should he be present, and prevention of any possible untoward incident as reasons for cancellation of the special convocation.

The university's annual convocation which does not require the Chancellor's presence, however, will be held on the same date -- December 24 -- JU Registrar Snehamanju Basu said.

"Systematically, they (state government) are trying to curb the chancellor, which cannot be done. In the existing arrangement, statutes can't be amended without the chancellor coming in to the picture," he said.

"When rule of law is sacrificed, the situation gets absolutely to the detriment of the democratic fabric. We have to be careful, such decisions will damage the system for ever," Mr Dhankhar said.

Referring to the university act, Mr Dhankhar said: "The Act makes the chancellor the head of the university, who presides over meetings of the court which is the highest body of the institute."

To a question about the Executive Council (EC) of JU taking the decision to put on hold the special convocation, he said: "The EC can only initiate the process to go to Court whose meeting I preside. I had already presided over one (in October). And if you examine further, you will find the highest body is the court and the EC is the subordinate body,"

He also questioned why the convocation cancellation letter came directly from the VC as till recently all communications were sent by the state government.

Mr Dhankhar said that on December 19 the registrar had sent a communication and his signatures were obtained as Chancellor at the initiative of Jadavur University that two degrees of D litt and two D Sc on the 64th Convocation on December 24.

"It took me four minutes to sign and they had been returned to the university. And now a little while back, a letter dated December 21 has been addressed directly to me by the VC postponing the date," Mr Dhankhar said.

He indicated that his patience as a chancellor cannot stay for "forever" but did not elaborate.

He also expressed hope that a meeting between Chief Minister Mamata Banerjee and him will be held and the "emergency like situation" would be reversed.

"There should not be a fight over who is the boss for the sake of the students'' future," he said.

Mr Dhankhar later said in a tweet: "Fifth university formal programme cancellation - latest Jadavpur University Convocation. For all my permission as Chancellor had been obtained and had agreed to attend all. A worrisome situation. Urge all former VCs and those concerned at state of education to guide with inputs."

Meanwhile, West Bengal Higher Education minister Partha Chatterjee said: "The decision of JU had been taken as the students got upset over his role and comments on issues like Citizenship (Amendment) Act and the government has no role in it."

The governor should introspect his role "as he has become the face of BJP," Mr Chatterjee said.