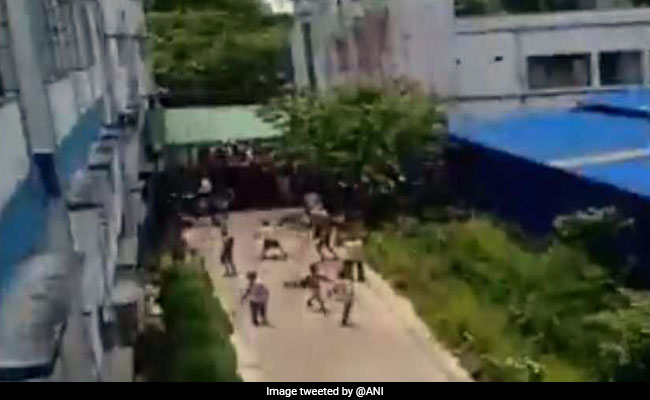 Crude bomb explosions were heard till late on Monday night in the troubled pockets of Bhatpara and Kakinada in north Kolkata, which comes under Barrackpore Lok Sabha constituency.

The trouble on Monday night came after a day-long violence that forced Barrackpore Commissioner Manoj Verma to personally patrol the streets.

Crude bombs went off intermittently in the area since 9 am on Monday. People put up a rail blockade at Kakinada, apparently in protest against the violence that has gripped large parts of the Lok Sabha constituency that saw a change of guard in the national election.

Trinamool Congress leader Dinesh Trivedi had lost to his former colleague Arjun Singh, who joined the BJP in April, just before the election.

The police said a group of people rushed to Bhatpara hospital and ransacked some of its offices, while another group went to the office of a civic agency nearby and vandalised it. Some miscreants also threw crude bombs outside Bhatpara police station, where senior police officers were present to monitor and tackle the situation.

Local train services from North 24 Parganas district were disrupted for nearly two hours. An arterial road was also blocked. There were reports that large gatherings were banned at areas that come under Bhatpara police station.

The Trinamool Congress and the BJP have accused each other of the violence. Police sources say groups backed by both sides were involved in fanning trouble afresh, 10 days after violence flared up in the area.

Peace meetings were over a week ago by political parties and civil society members.